‘Portrait of Peace’, not burning effigy, in Duterte Sona 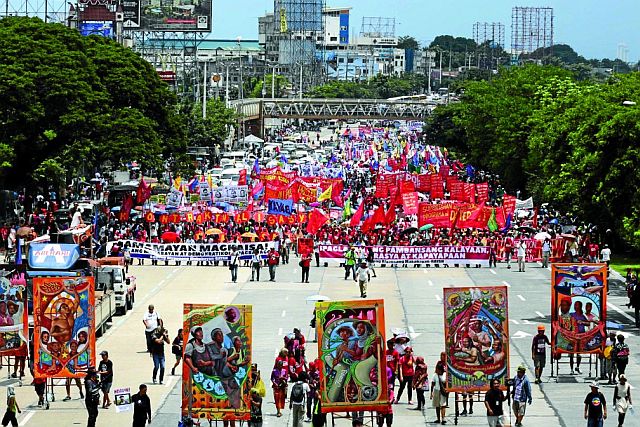 Rallyists march with their murals instead of burning effigies to show their support for Pres. Rodrigo Duterte during his first State of the Nation Address.

Militant groups on Monday paraded a six-panel mural as they marched to Batasan Hills on Monday to rally in support of President Rodrigo Duterte’s first State of the Nation Address (Sona).

This marked the first time Bagong Alyansang Makabayan (Bayan), the biggest nationwide alliance of militant organizations, did not use a burning effigy as the centerpiece of its Sona rally, aptly themed “Mamamayan, Magkaisa para sa Makabayan at Demokratikong Pagbabago.”

“The mural aims to visualize the people’s aspirations for a better society,” Bayan said in a press statement.

“Together they form the picture of the people’s hope for genuine change and a just and lasting peace,” Bayan said.