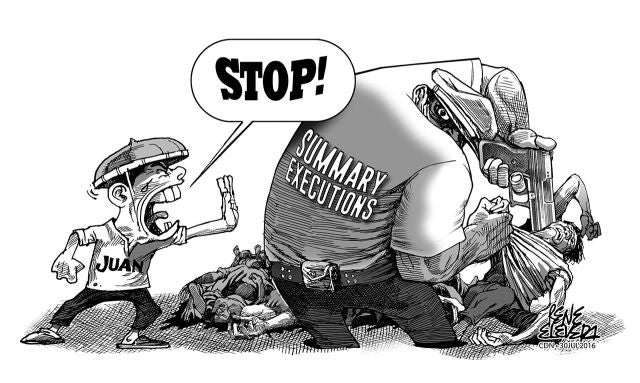 President Rodrigo Duterte’s vocal assurance of his administration’s commitment to follow the law in the war against illegal drugs may or may have been the go signal for the Commission on Human Rights (CHR) to intensify their investigation into alleged extrajudicial killings across the country, including Cebu.

At least that’s what CHR-7 investigator Leo Villarino told reporters a day after the President delivered his Sona and reiterated his earlier promise that the war against illegal drugs would be “relentless and sustained.”

The President made special mention in his address about a photo that appeared in the Philippine Daily Inquirer’s front page in which a woman was seen cradling her dead husband’s head minutes after he was supposedly shot down for his alleged drug links.

There would be very few who would debate, much less disagree, with President Duterte’s statement that the rights of the victims should be prioritized over the criminals.

The President made the reference to the late Singaporean leader Lee Kuan Yew who said the state had the moral obligation to protect its law abiding citizens from the criminals.

In justifying the intensified, relentless war against illegal drugs, President Duterte minced no words in saying that he would never hesitate in killing those whose activities are killing the country.

Such strong words had won the support of majority of the Filipinos as evidenced by the latest Pulse Asia survey which showed the President enjoying a 91 percent trust rating in his first few weeks into office.

President Duterte’s take-no-prisoners mind-set was carried over to the police, including Chief Supt. Noli Taliño, a former Special Action Forces (SAF) commander and now Police Regional Office chief, who said it’s better for the police to take down the criminals rather than being killed by them.

Certainly, no one would want any police officer to die in the line of duty, and again, one could hardly argue with Taliño’s point. Though unfair, it is the police’s responsibility to make sure that their ranks follow the rules of engagement and legal procedure in going after these criminals.

The climate of fear created by President Duterte’s threat of a relentless war on illegal drugs may have compelled users and pushers to come in droves to surrender; but it also backed others into a corner and in their desperation, chose to fight back, having resigned themselves to the fact that the police were given the green light to kill when they resist arrest.

And this violence begets more violence as unidentified assailants began taking out drug suspects without fear of reprisal. Due process is taken out the window, and it will continue to happen unless the police stops it.

We want to believe Taliño when he said his police force will follow due process, and he could restore that faith if he manages to stop these killings.

Read Next
Unity, diversity and mercy