THE LOST ANTHEM will take you by the heart 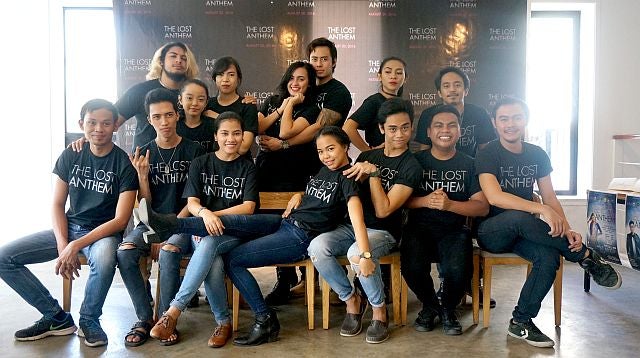 The young cast of “The Lost Anthem”

YOU don’t want to be labeled “retro” but you catch yourself belting 80s rock songs on videoke nights, and hearing rock ballads on the radio strikes a chord of nostalgia in you. Maybe Bon Jovi or Queen are the music you grew up with. Or some of your favorite bands are from before you were born.

Millennials and their Gen X parents, teachers and bosses. Is there a way to bridge the disconnect between generations?

This is the message of the young guns behind Inerxa Productions who will stage the rock musical “The Lost Anthem” in Cebu on August 20 at Cinema One of SM City Cebu.

Directed by Jissa Saludar with musical direction by Jeo Librando, composer of the International Eucharistic Congress (IEC) official hymn, “The Lost Anthem” on the whole tackles the varied issues of young people. Here, song lyrics are used as metaphors to illustrate their struggles, like finding a lost cause, a lost love, a lost voice.

Following the story of Juliet and Fredd, the rock musical will revive iconic songs like “You Give Love A Bad Name,” “Help,” “I Want To Break Free,” “Beat It” and more through mash-ups.

According to executive producer Angela Conde, the production will not only help rebrand the rock genre for the millennial’s preference, but also be the voice of the youth who have problems expressing what they want.

The cast is led by ABS-CBN’s Showtime Kalook Alike contest winner Melody Hodgson (who will play the role of Juliet) and Sol Casino (as Fredd).

“Young, talented and passion-driven, the cast will not only perform to impress but also inspire people to fight for what they believe in, and to show society that it is not only just a musical story, but it is everyone’s story,” said show director Jissa Saludar.