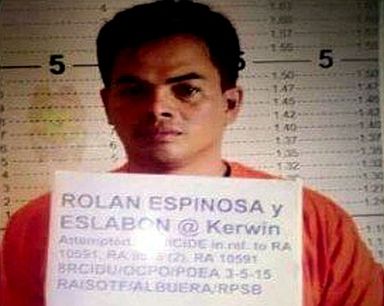 A police photo of Rolan Espinosa, alias Kerwin, who is now the subject of a manhunt by the police. (RADYO INQUIRER/DZIQ)

He said Kerwin is known to be somewhere in Cebu.

“Now I challenge the PNP to find Kerwin who is known to be somewhere here in Cebu. And to find their protectors in the police department because one of his alleged protectors in the PNP is going to be brought back in Cebu City,” Osmeña said.

Osmeña refused to elaborate and declined to divulge the names of Kerwin’s protectors in the PNP. But he reiterated that he heard that some of those protectors are coming back in the city.

If the police are able to capture him, Osmeña said he would reconsider his decision on withdrawing his support for the police.

As the chase for Kerwin continued, his alleged right hand man was shot dead in a buy-bust operation conducted by the Philippine Drug Enforcement Agency (PDEA) in Central Visayas at past 5 p.m. yesterday.

He was supposed to help law enforcement authorities to find Kerwin, but he allegedly shot at them first, which ensued to what PDEA claimed was a shootout.

Julito Prak was brought to the Vicente Sotto Memorial Medical Center after sustaining multiple gunshot wounds from what the operatives claimed was a shootout in Sitio Senior San Roque, Barangay Hipodromo, Cebu City.

Ruiz said it is possible Prak knew the current whereabouts of Kerwin.

Ruiz claimed that Prak was top four on the PDEA list of drug personalities although he had no pending warrants of arrest or cases filed against him in court.

PDEA operatives allegedly recovered a .38 caliber revolver, 50 grams of shabu and P100,000 in marked money from the body of Prak.

According to Mayor Osmeña, Kerwin is known to operate in Cebu City and is even a bigger drug lord than those who have been killed.

Senior Supt. Rey Lyndon Lawas, Deputy Regional Director for Operations, told reporters yesterday that he has tasked the Cebu City Police Office and other units in Central Visayas to look into reports that Kerwin is just hiding in Cebu.

CCPO chief Senior Supt. Joel Doria said they are validating reports that Kerwin was sighted near his ancestral home in Hipodromo.

The PNP headquarters is also verifying reports that he has left the country and is currently in Malaysia.

“But in the meantime, I just don’t have any confidence in them, especially General Ronald “Bato” dela Rosa,” Osmeña said.

The mayor said he will give his full support to the PDEA, saying they are the only ones he can trust.

He again recounted that he had asked the PNP Director not to relieve former Police Regional Office (PRO) 7 director, Chief Superintendent Patrocinio Commendador, and dela Rosa had promised to give him three months.

But Comendador was relieved after a month without even informing the mayor beforehand.

“And when he (dela Rosa) changed (Commendador), he did not tell me in advance. And when I called him, his secretary answered, but he did not return my call. I want to report this to the Cebuanos because it has been made appear that I am just acting like a spoiled brat, but we really lost our momentum,” he said.

When asked if he was confident that he would not be among the mayors allleged to be drug protectors, Osmeña said that he would be more than happy to answer the charge and he will call dela Rosa to the witness stand.

“It’s not a matter of confidence. You know, if they want to name me, they will name me because it’s very clear the direction is going there. It’s okay. I’ll answer everything,” he said.

But the mayor questioned how he could be a protector of drug lords, pointing out that for the past six years he was not the mayor.

“Who was the mayor? People in Cebu know who was the mayor. Yawa (Rowen Secretaria) is from Barangay Ermita. All the barangay officials in Ermita, including the tanods, (are) Team Rama. How can I protect Yawa? How can I protect Jaguar (Jeffrey Diaz)? When the barangay captain of Duljo-Fatima and all the councilors are Team Rama even every single tanods are Team Rama. And the police chief is Team Rama. How can I even protect him (Jagaur)?” he said.

He said Comendador became PRO-7 chief after the elections and could not be considered a drug protector because he was not in Cebu when the two suspected drug lords were still alive and activtely involved in the illegal drugs business in the city.

“So how could Comendador protect him before elections and all those years? All I can do is explain this to the Cebuanos, who know the situation,” he said.