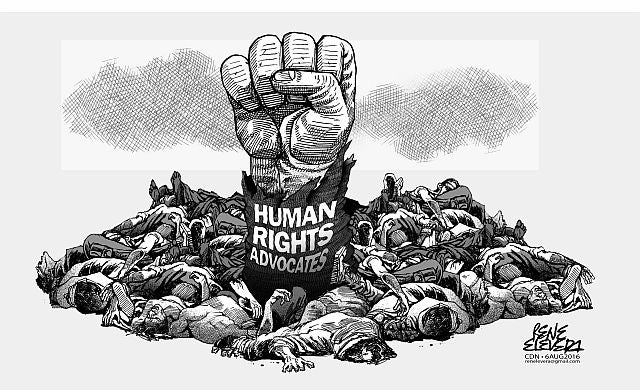 The sight of dead persons carrying crude cardboard signs usually bearing the words “Pusher ako, huwag niyo akong tularan (I’m a pusher, don’t be like me)” or a similar message written in Visayan had raised concern among rights groups and persons who condemn the extrajudicial killings.

The Cebu City police recorded at least two killings a day from July 27 to 29 in Cebu City and it’s not an isolated incident. In Central Visayas, 19 suspected drug dealers were killed since July 1, when President Rodrigo Duterte assumed the presidency.

That the President himself made it clear that he wants a relentless, sustained campaign against the illegal drug menace, never mind if a thousand people a day were killed, should perhaps not shock anyone living in this country anymore except perhaps for the hardy and principled minority who still believe in due process.

When Cebu’s legal luminaries denounced the killings and sought action, Chief Supt. Noli Taliño, Police Regional Office chief, ordered an investigation into the summary executions of suspected drug dealers but most everyone knows or suspects by now who are the clear perpetrators.

As last Sunday’s Cebu Daily News front page story pointed out, the incidence of summary executions or extrajudicial killings is nothing new in Cebu City especially during the tenure of Cebu City Mayor Tomas Osmeña in the early 2000s.

It supposedly stopped during the staging of the 2007 Association of Southeast Asian Nations (ASEAN) summit but with no major international event in sight, what’s to stop these extrajudicial killings from becoming a daily occurrence?

Though there are loud protests from rights groups, the church and the lawyers, and the lamentations of the victims’ loved ones — the most prominent by far being a photo splashed in the front page of the Philippine Daily Inquirer of the woman who held her slain live-in partner in her arms — public sentiment at best is largely apathetic to the killings.

This can be viewed as either support for or indifference to the summary executions of suspected criminals. After all, the rationale of advocates of these killings reason, if you’re not doing anything wrong why fear it?

That is until the dead bodies start piling up and near your doorsteps. Until then, the question that lingers in everyone’s heads is: who is responsible and how can they be stopped?

Nothing short of an actual footage similar to what was taken during the Mamasapano massacre can perhaps shed light on the identities of the perpetrators and stir up public outrage over the rash of killings. But who would be brave and stupid enough to do this?
Until then, the spate of summary executions will continue and rights advocates will be hard-pressed even with a congressional investigation to mobilize strong, sustained public opinion against it.

Read Next
Blood cries out