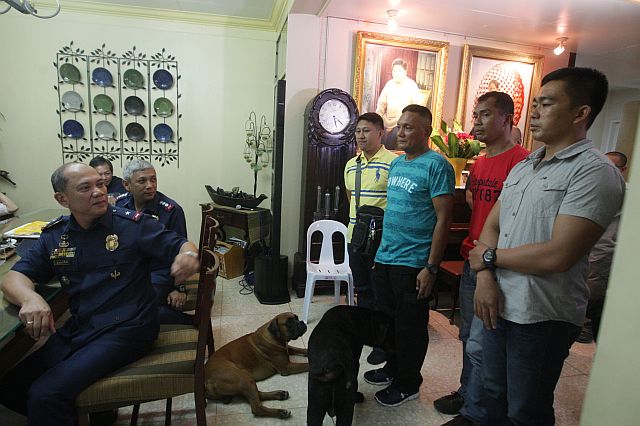 Barely 24 hours after Cebu City Mayor Tomas Osmeña was stripped of his control over the Cebu City Police Office (CCPO), the mayor was hit by another blow by the Philippine National Police (PNP).

Yesterday, the mayor also lost his three police escorts, including his controversial and trusted aide SPO1 Adonis Dumpit. He was directed to turn over to the Police Regional Police Office in Central Visayas (PRO-7) 249 city-owned firearms with expired licenses.

This developed as another mayor, Vicente loot of Daanbantayan town, was informed yesterday by the National Police Commission (Napolcom) that he no longer has control over the town’s police force.

Loot, a former police general, was among the five top former and active police officers who were named by President Rodrigo Duterte as alleged coddlers of drug lords. Loot has belied the accusation.

Taliño said the order to recall Osmeña’s police escorts came from the “higher ups” in Camp Crame whom he did not name. But he explained that the three policemen did not have permission from PNP Director General Ronald “Bato” Dela Rosa to serve as Osmeña’s security aides.

He said the former CCPO chief, Senior Supt. Benjamin Santos, gave Osmeña the escorts without the approval of the PNP chief. “That’s unauthorized and so we have to pull them (three policemen) out,” he said.

When asked who would secure the mayor from now on, Taliño responded by saying it was no longer a concern of the PNP.

Vice Mayor Edgardo Labella, while not a political ally of Osmeña, said the PNP should reconsider because Osmeña is a mayor of a highly urbanized city and should have police escorts.

“I hope they (PNP) will reconsider. The mayor needs security, considering his position,” he said.

But Labella himself has no police escort, saying he does not find it necessary to have one.

Dumpit, for his part, said he would follow the directive of PRO-7, saying: “Always man gyud ko nga mo-obey sa higher officials namo sa PNP. Para nako, under man ko sa PNP, kon unsay ilang order, mo-comply ko. (I always obey orders from higher officials in the PNP. I am under the PNP, and whatever they ask me to do, I will comply).”

Dumpit said he sent a text message to the mayor to bid the latter goodbye since he will be heading for Bohol today. Osmeña, who is on medical leave, will return to the city on Aug. 14.

Osmeña has not responded when asked, via his Facebook page, on what he would do with the withdrawal of his police escorts.

At past 9 p.m. however, he posted this on Facebook: “Adonis (Dumpit) texted me to apologize that he was being made to leave for his reassignment to Bohol before I get back. I told him not to worry, and wished him the best.”

Dumpit, tagged in the deaths of three crime suspects and the wounding of a dozen more in Cebu City since the late 90s as head of Osmeña’s crime busting group called “Hunter Team,” was released from the Leyte Regional Prison in Abuyog, Leyte last May 26 after the Court of Appeals granted his petition for bail, giving him temporary freedom while his case is on appeal. He was convicted of homicide in August 2014 for shooting dead a 17-year-old robbery suspect in Cebu City almost 10 years ago.

Osmeña paid the P250,000 bail of Dumpit who was even fetched from jail by Osmeña’s son, Miguel. After he stepped out of jail, Dumpit immediately reported to Osmeña and had been accompanying the mayor since.

Taliño said Dumpit was supposed to be assigned at the Firearms Explosives Security Service Agency and Guards Supervisory Section (FESSAGS).

However, Taliño, who assumed as PRO-7 director last July 4, was surprised to learn that Dumpit was reporting to Osmeña.

Taliño said that if Osmeña wants to have a police escort, he should follow the proper procedure, which is to file a request through PRO-7 that he, in turn, would recommend to the PNP chief.

Napolcom on Wednesday decided that Osmeña was no longer a deputized representative of the Commission, a move that was in response to the mayor’s withdrawal of a number of financial aid to the city police, including the city-issued firearms and the gas allocation for patrol cars.

Taliño affirmed that the 249 firearms that were to be turned over to the PNP by the Cebu City government included those that Osmeña previously took back from the city police.

But Taliño stressed that the firearm recall order did not only cover Cebu City but also the cities of Mandaue and Lapu-Lapu as well as the provincial governments of Cebu, Bohol and Siquijor. The directive was part of the PNP’s “Oplan Kontra Boga” meant to go after loose firearms, he said.

“In Central Visayas, we learned that guns owned by the different local government units are unlicensed, so they are considered loose firearms,” he said.

These LGUs have until Aug. 24 to turn over their unlicensed firearms to the nearest police stations for safekeeping while they process the renewal of the gun permits, he added.

“After they could secure permits, we can return the firearms to the local government units,” Taliño said.

Taliño also said PRO-7’s recent actions against Osmeña have nothing to do with the mayor’s withdrawal of support to the local police. “We are supportive to the peace and order programs of the Cebu City government. With or without its support, the police will continue doing its mandate using whatever we have,” he said.

Asked what they will do if Osmeña will get back at the police, the former Special Action Force chief said: “Nakahanda tayo (We are ready).”

“Whatever happens, we will continue carrying out our task as well as the priority programs of President Rodrigo Duterte, particularly against illegal drugs. The challenge is to be able to fulfill our duties and responsibilities even without the support of the mayor,” Taliño said. “If there’s a need for our policemen to just walk in responding to alarms, then we will. There are a lot of ways for us to do our mandate. We can use our personal vehicles or the motorcycles given by Camp Crame.”

But even as Osmeña has lost his authority over the city police, Taliño and Senior Supt. Joel Doria, the CCPO chief, visited Labella in his office yesterday to assure the city official that the PNP will still work with the city government in its drive against illegal drugs and criminalities.

Labella, the city’s acting mayor until the return of Osmeña on Aug. 14, said he appreciated the two police officers for personally assuring him of the police’s continued anti-crime campaign in the city.

Doria, on the other hand, went to the city’s General Services Offices (GSO) to hand the recall order to GSO head Ronald Malacora but the latter was out on official business.

Malacora said he consulted the city legal office on their next moves and had checked with the PNP’s Firearms and Explosive Office on what to do with the order since the city government still has to complete its firearms inventory. In fact, he added, 13 city policemen are still to return their city-issued firearms.

Malacora last month said they began processing the licenses for 254 city-owned firearms and have secured requirements like the License to Own and Possess Firearms (LTOPF). Once the documentations are completed, the firearms will be reissued to members of the city police, barangay officials, department heads, and other officials, he said.