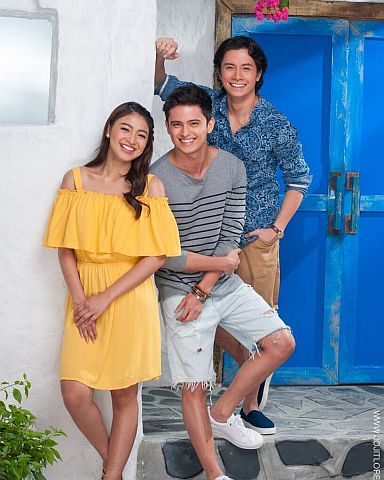 WITH the unveiling of the new teleserye that will be topbilled by reel-to-real life couple James Reid and Nadine Lustre, the JaDine loveteam confirms the storyline will explore on LGBT (lesbians, gay, bisexual, transgender) theme.

The cameras are rolling for the taping of “Till I Met You” Lead stars Nadine and James jetted off to Greece to shoot for the first part of the series
together with JC Santos, who will play as the third wheel who has feelings for Sebastian, James’ character.

The Kapamilya stars have been updating their Instagram accounts featuring their adventures in Greece during the shoot.

In the photos, Nadine (who is cast as Iris) wears floral rompers and eyeglasses while James dons a striped shirt, distressed maong shorts, a cap and an earring.

In an interview aired in Tonight With Boy Abunda Wednesday night before they left for Greece, James and Nadine confirmed that the series will have a theme geared towards the LGBT (lesbian, gay, bisexual, transgender) community.

“Til I Met You” will start airing next month.

According to James, the main characters will meet on a vacation in a European country.

Asked about his opinion on the script of “Till I Met You,” which will see him presumably be paired with Santos, he said: “We’re proud to be ones who get to tackle that issue.”

Rumors about the LGBT storyline first sprung up after the debut of the trade trailer, which even featured the #LoveWins hashtag, in the rainbow colors often used to symbolize the LGBT community.

“Till I Met You” will reunite Reid and Lustre with their “On the Wings of Love” director Antoinette Jadaone.

WITH long black locks and toned physique, it would be easy for theater actor JC Santos to charm his way to the Filipino masses, as soon as he starts to linger in our evenings as a face like his would be hard to miss.

JC has been cast to play the role of Alejandro, the new third wheel of James Reid and Nadine Lustre for the LGBT themed television series “Till I Met You.”

But what do we know about him?

A heartthrob in the making, the new primetime bida hottie is a theater arts student from the University of the Philippines Dilliman.

He is not new to the limelight, having been able to perform in a number of plays, including live shows in Hong Kong Disneyland and Universal Studios Singapore.

JC has also topbilled an LGBT-themed independent film “Espirit De Corps,” an adaptation of Auraeus Solito’s play entitled Esprit de Corps in the 1980s about the game of seduction and ranks in the ROTC. It is a queer story of two cadets and their pursuit to outwit a corrupt Major Marcus for his position.