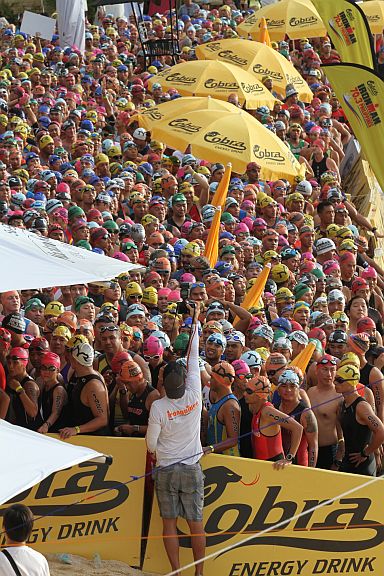 Thousands of Cobra IronMan 70.3 participants wait for the start of the swim leg of the race at the Shangri-La’s Mactan Resort and Spa during last Aug. 7, 2016 event. (CDN PHOTO/JUNJIE MENDOZA)

Organizers of the Cobra IronMan should consider getting local stakeholders and government units more involved in next year’s race.

Edilberto Mendoza, president of the Cebu Association of Tour Operators (CATO), said the hosting could have been improved if other sectors were allowed to come in.

“There was nothing new anymore to see, just the same every year. We could have added some spice in it,” Mendoza told Cebu Daily News.

Tour packages for race participants and their families were pre-arranged by the organizers, he added, so local tour operators didn’t have much business to do except for tourist transport.

Mendoza said operators in Cebu should be allowed to come up with attractive tour packages to discourage pre-arranged tours.

He cited as an example incentive tour packages for participants such as free Cebu City day tours for groups of 20 people and up or by offering welcome kits.

In terms of safety and security, he said Cebu has improved with its hosting this year since only minor incidents were reported.

Lapu-Lapu City Tourism Chief Hembler Mendoza said the hosting of the race in Mactan Island has had positive effects in the local tourism industry.

“Hotels had high occupancy rates. Restaurants enjoyed higher revenue compared to ordinary days. Even small vendors were able to benefit from the race,” he said.

Hotels near Shangri-La’s Mactan Resort and Spa, the venue of the race, reported more than 90 percent occupancy during the IronMan weekend from August 5 to 7, 2016.

Mövenpick Hotel Mactan Island Cebu reported a 100 percent occupancy rate during that weekend, with IronMan participants accounting for more than 50 percent of their guests.

Plantation Bay Resort and Spa reported a three-day average of 97 percent in occupancy, but these were attributed to non-IronMan participants, who were mostly Japanese and Koreans.

Lapu-Lapu City’s Mendoza claimed that restaurants in the vicinity earned in one day during the event what they would have earned in five days.

“The revenue they get in 15 days, they were able to get in just three days,” he said.

He added that small food and beverage merchants around the island were also able to earn in one day seven times more than what they would have earned on a regular day.

Mendoza said that with another IronMan event slated for next year, they would be coming up with more creative ways to showcase their city as well as come up with a better presentation of the carbo-loading event, a major pre-race event the local government hosts each year.

He also said they would be working closely with event organizers to make sure more countries find out that next year’s championship event would once again be held in Cebu.

Cebu’s hosting of the IronMan this year not only boosted the tourism industry here, but it also helped local micro and small enterprises.

“Not only is it a showcase of our attractiveness as a destination, but it also shows the world the beauty and investment opportunities in Cebu,” she told CDN.

The yearly success of the IronMan in Cebu is a feather in the cap of Cebuanos, Ng added.

Not only has it shown Cebu’s ability to host international events, local businesses has also benefited from it.

Micro, small, and medium-sized enterprises, which are part of the supply chain for products and services needed throughout the event, get a spillover both from pre- and post-race activities.

Examples of these are small vendors selling food to spectators as well as restaurants where the participants could eat.

At least 5,000 people watched along the race route from Mactan Island to Talisay City.
This year’s race drew close to 3,000 athletes from 43 countries, including the Philippines.

Cenelyn Manguilimotan, past president of the Hotel, Resort, and Restaurant Association of Cebu (HRRAC), echoed Ng’s sentiments and said that international sporting events serve as good marketing for the province.

For Mandaue Chamber of Commerce and Industry (MCCI) president Glenn Soco, events like the IronMan highlight Cebu as an events and convention destination.

Aside from the IronMan next year, Cebu is also possibly set to host two other major international events — Asean Summit meetings and Miss Universe activities.