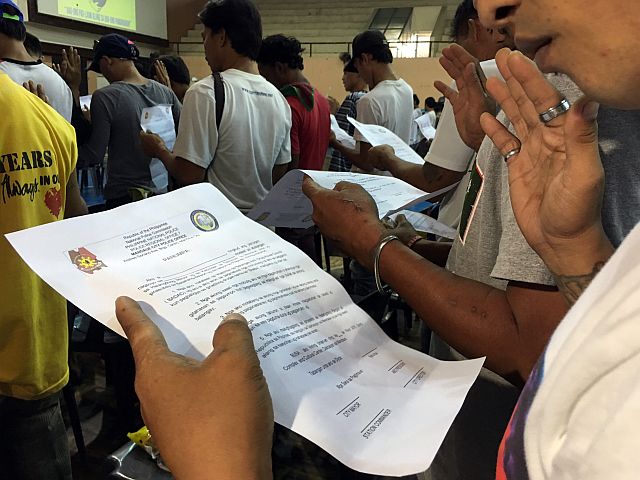 Suspected drug users and pushers give themselves up to police in this July 4, 2016 file photo in Mandaue City. The increasing number of surrenderers especially in Central Visayas has highlighted the need for more rehabilitation centers to treat these people (CDN FILE PHOTO)

A Cebuano business leader said there is a need to find options to make investing in drug rehabilitation centers lucrative as a business.

Glenn Soco, president of the Mandaue Chamber of Commerce and Industry (MCCI), said Corporate Social Responsibility (CSR) would come naturally out of the private sector’s willingness to help but it would not be enough.

“It should become a business model for it to become sustainable,” he told Cebu Daily News in a phone interview last week.

Soco made this statement after San Miguel Corp. donated P1 billion for additional drug rehabilitation centers in the country.

Aside from the donations, Soco said the government should partner with the private sector and allocate government resources to make the environment fertile for investments.

Once this happens, he said there would be a lot of businessmen who would be willing to invest in these facilities.

“This will bridge the gap between supply and demand,” he added.

Presidential Assistant for the Visayas Michael Dino, in a press conference earlier this month, called on the private sector to step in and help address the lack of facilities to house drug users who have surrendered to police.

Dino said he had tapped private hospitals in Cebu City which planned to expand their drug rehab centers and asked them to offer subsidized rates.

The Philippine National Police’s latest count showed there are around 43,000 drug surrenderers in Central Visayas alone. Nationwide, almost half a million confessed drug users have surrendered.

A new project set to be rolled out by the Department of Trade and Industry (DTI) is seen not only to provide greater market access and exposure to MSMEs, but will also help fund the construction of new rehabilitation centers, a recent Inquirer report stated.

Trade Secretary Ramon Lopez earlier said that he has tapped big mall retailers such as the SM Group, Rustans, Puregold, and Robinsons to provide free space for MSMEs to display their products.

The Inquirer report added that the proposed program was just one of the measures being considered by the new administration to boost the access of MSMEs to the domestic market.

This move is expected to help these enterprises take on bigger endeavors once they start exporting their products.

Lopez said they would be looking at rolling the project out in department stores in the next two months, with a portion of the retailers’ proceeds from the sale of their products be set aside for the construction of rehab centers.

Ma. Teresa Chan, Cebu Chamber of Commerce and Industry (CCCI) past president, said she agreed that the private sector should help these drug users who have surrendered.

“However, it should be voluntary and should also apply to the MSMEs. If they are given free space in order to help them succeed, then let them contribute voluntarily, too,” she said.

MCCI past President Philip Tan, meanwhile, said it would be the responsibility of the business sector to be socially involved in whatever capacity to prevent the drug problem from worsening.

CCCI President Melanie Ng, for her part, said they would also be exploring ways on how the chamber could assist the government in the rehabilitation process here in Cebu concerning livelihood development.

“We believe livelihood opportunities sustain life as with training and capacity building. One can develop skills or produce product that the market needs,” she said.