Under fire, acting warden quits post, to be reassigned 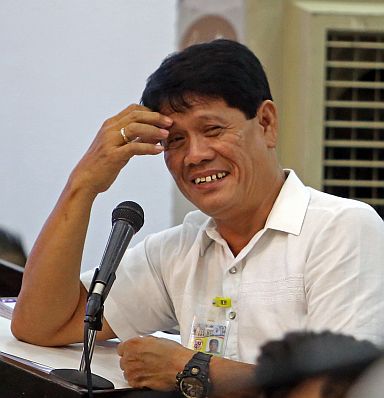 In a press conference Cebu Gov. Hilario Davide III said Manansala personally submitted his resignation letter at his office at past 10 a.m. yesterday.

He said Manansala asked to be relieved from his post to allow other jail officials to serve as jail warden.

Manansala also asked that he be given until Friday to remove his belongings at the office.

Davide said Manansala left several recommendations to improve the jail facility, and these will be included in discussions by a task force or a committee he will create to oversee the management of CPDRC.

Davide said he will reassign Manansala under the Civil Security Unit (CSU) of the Capitol.

The governor said he intends to cleanse the jail facility in the wake of reports about the anomalies allegedly perpetrated by former Capitol consultant on jail matters Marco Toral.

Davide is also thinking of replacing the jail guards in the next few days and a takeover of the CPDRC by the regional Bureau of Jail Management and Penology.

While these changes are being put in place, Davide said visiting privileges remains suspended for the inmates. Manansala said he is willing to face any investigation in light of last Saturday’s raid at the CPDRC.

“I was totally unaware of the issues surrounding Toral,” Davide told reporters.

Manansala was grilled by the Cebu Provincial Board (PB) in their session last Monday on last Saturday’s incident. Manansala said he tasked the blue guards at the entrance of the jail to check the visitors but Vice Gov. Agnes Magpale told Manansala: “namakak ka” (you are lying) during the PB session.

Magpale said a German consul approached her two months ago and told her that a certain German national continued his cyber pornography business inside the jail.

“Nauwaw ko sa German consul kay wala tay gibuhat (I was embarrassed in front of the German consul because we did not do anything),” she said.

Magpale’s investigation led to the discovery of other illegal activities inside the jail facility.

Manansala said the German national Thomas Michael Ruhland bought the laptop from an inmate who was released from the jail.

Manansala said Toral himself admitted during an interview with radio broadcaster Lloyd Suarez that he allowed the rental of the conjugal rooms.

Manansala said it was also Toral who allowed a certain inmate named Jennifer Perigrino to raise three fighting cocks inside the jail and allowed her to park her car inside the facility.

He also claimed that Toral sold gadgets inside the facility and allowed visitors who attended his birthday party there to stay for five days from Thursday to Monday. Manansala said he called Toral’s attention but Toral didn’t listen to him. Toral resigned last week and could no longer be contacted for comment.

Read Next
Drug-related killings climb to 132 in Cebu