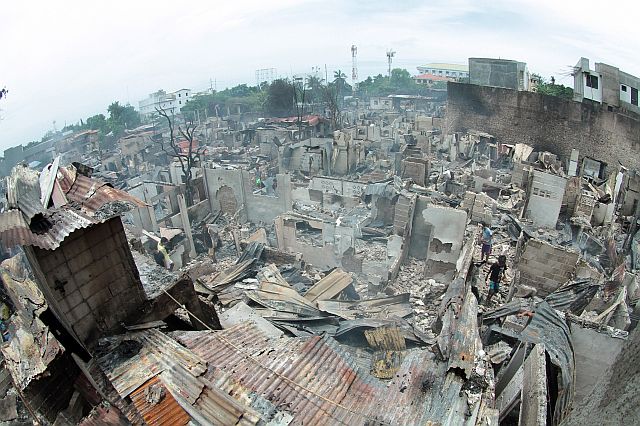 DOE orders probe on use of refilled butane canisters

Department of Energy in Central Visayas (DOE-7) Director Antonio Labios yesterday said he would be sending personnel to investigate the incident even as he awaited the official reports from the police and Bureau of Fire Protection (BFP).

The fire on Monday, which displaced 857 individuals and burned down 130 houses, was caused by an unattended candle, but exploding butane canisters filled with Liquefied Petroleum Gas (LPG) used by many residents in the area caused the fire to spread quickly.

“The public is strongly advised not to sacrifice safety over convenience and the low cost of illegally refilled butane canisters,” said Labios.

He explained that butane canisters are meant to only be used one time and refilling them with LPG would be dangerous because it is more pressurized, meaning more likely to blow up.

“This falls under illegal trading of petroleum products,” he said, that could result to a fine of up to P50,000 or imprisonment of 2 to 5 years for convicted violators, mainly unauthorized retailers and haulers.

Labios admitted that they have not penalized anyone for refilling butane canisters with LPG yet as the agency’s campaign has been focused on the illegal trade of petroleum products in general.

However, he said the DOE has been aggressively campaigning against it with the police, BFP, and local government units.

So far in Metro Cebu, Labios said only the cities of Lapu-Lapu and Mandaue have enacted an ordinance prohibiting the trade of LPG-filled butane canisters.

He said they are working closely with stakeholders to crack down on these illegal petroleum products in the coming months.

While the fire in Sitio Arca was triggered by an unattended lighted candle, the explosions caused by refilled butane canisters fanned the blaze, revealed SFO1 Hadji Samonte of the Lapu-Lapu City Fire Central District (LCFCD).

Angelita Pasonilao, 36, admitted to fire investigators that the fire originated from her house and was caused by a lighted candle, according to Samonte.

Samonte said Pasonilao, whose husband is a seaman working abroad, said she used a candle on Monday night because her home’s electricity was cut off over an unpaid bill. Pasonilao sustained burns in her right arm but was lucky to save her two young children, he added.

Pasonilao and her children now live with her brother in Cebu City and have refused to return to Sitio Arca as they feared the wrath of their now homeless neighbors, Samonte said.

The four, who are now housed along with other fire victims at the Pusok Elementary School, revealed that most of their neighbors used refilled butane canisters since these were cheap, with each canister costing only around P12.

All four work for Tong Fang International Inc., a watch maker located inside the Mactan Export Processing Zone (MEPZ). Their company provided them plastic bags of goods as assistance.

Ycong, who was one of the seven original settlers of Sitio Arca, lost to the fire his 49-room boarding house. Each room was equipped with a fire extinguisher but these were no match to the fire that suddenly engulfed his property, he said.

Ycong, like the other fire victims, now has nowhere to go except for Pusok Elementary School.

Former Lapu-Lapy City Councilor Alexander Gestopa Jr. authored the ordinance banning refilled butane canisters in the city, which was approved last April, but it was not immediately implemented as everyone was busy with the elections last May.

“Now is the right time to enforce the ordinance,” he said.

Gestopa added the police would have to take the lead in enforcing the ordinance by seizing refilled butane canisters and arresting those found to be transporting and selling them.

Under the ordinance, traffic enforcers and policemen are authorized to apprehend vehicles transporting refilled butane canisters.

The ordinance fines violators P3,000 for the first offense as well as impounding the vehicles used to transport the canisters. Those selling the refilled canisters will be fined P5,000.

The measure faced strong opposition from the Cebu Budget LP Gas Association when it was deliberated in December last year, but the city government prevailed, he said.

Mayor Paz Radaza yesterday agreed that they would now need to implement the butane ban ordinance.

Jun Alforque, vice president of the Cebu Province LPG Re-fillers Association, however, believed that a ban should not be the answer but for government to create an agency that would monitor and regulate the sale, use and distribution of refilled butane canisters.

“Using refilled butane canisters is practical, cheap and easy to transport. Many cannot afford to buy an LPG tank,” he said.

Berame said 130 houses made of mixed concrete and light materials were razed by the fire that broke out at 9:49 p.m. and was put out only at 4 a.m. on Tuesday, with the help of firefighting forces from as far as Minglanilla in the south and Compostela in the north.

Damage was placed at P1.3 million.

Radaza has suspended the classes in all levels at Pusok Elementary School and Matumbo National High school to accommodate the fire victims.

The Pusok barangay council led by Captain Caridad Dawat has declared the village under a state of calamity to enable them to use their disaster funds and to ask for financial assistance from the city government.

Personnel from the City Health Department were also tasked by Radaza to monitor and provide health services to the fire victims.