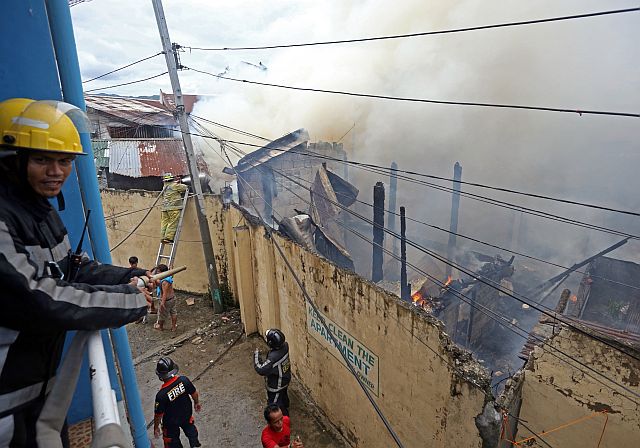 A furniture store and 13 houses were destroyed by fire in separate outbreaks in the cities of Cebu and Talisay yesterday.

In Cebu City, 13 houses were destroyed and six others were damaged in a fire that broke out in Sitio Tabay Alumnus, Barangay Basak San Nicolas at past 11 am.

Senior Fire Officer Edwin Handayan, fire investigator of the Bureau of Fire Protection (BFP) Cebu City station, said the fire was put out at past noon.

He said their initial investigation showed the fire was caused by an overheated ceiling fan.

The fire started at the room of a certain Rechie Resurreccion located at the ground floor of a two-story house made of light materials.

But some neighbors claimed that the fire was caused by a rice pot that was neglected by Resurrecion’s mother Brenda.

Brenda, however, claimed that she was not at home when the fire broke out since she was at work.

When reporters pressed her for details, she declined to answer. Damage to property was pegged at P200,000.

A fire volunteer from Barangay Sambag Dos sustained a cut on on his left arm, but no one else was injured or wounded.

Barangay San Nicolas chairman Norman Navarro said they have yet to determine the number of families displaced.

But he said they were advised to stay at the Basak Community School temporarily.

In sitio Mananga 1, Barangay Tabunok in Talisay City, a wood furniture display center was burned down by fire at past midnight Sunday. The fire was put out six hours later.

No one was hurt in the incident. Mendaros said damage to property was pegged at P300,000.

He said they have yet to talk to the owner about the cause of the fire.

Read Next
Down and dirty