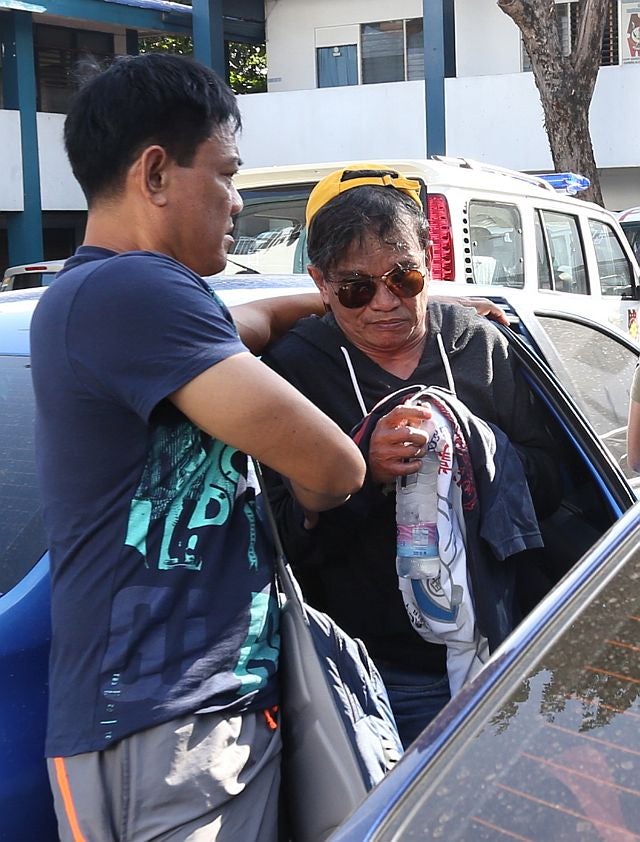 Roderic James “Ric-ric” Espina (in dark glasses), an allege cohort of big-time drug lord Rolando “Kerwin” Espinosa Jr., was arrested by elements of the Regional Special Operations Group (RSOG) in a pension house along Gen. Echavez St., Barangay Lorega after he was put under surveillance for bragging that he and Kerwin were friends. Police said they chanced upon packs of marijuana and shabu along with other contraband items inside Espina’s room. (CDN PHOTO/JUNJIE MENDOZA)

Bragging about having suspected drug lord Rolando “Kerwin” Espinosa Jr. as friend can get you in hot water.

The only child of the late mayor Edgarino Espina of Maasin City in Southern Leyte was arrested following an operation that was triggered by the suspect’s claim that he and Kerwin were friends.

Policemen waited outside the room rented by Roderic James “Ric-ric” Espina at Allsons Inn in Barangay Lorega, Cebu City since they didn’t have a warrant.

When Espina opened the door past 5 a.m. on Wednesday, police operatives from the Regional Special Operations Group – Regional Anti-illegal Drugs Special Operations Task Force (RSOG-RADSOTF) reportedly caught a glimpse of packs of marijuana and shabu and two firearms on the table. They immediately barged in and arrested Espina.

Five hours after the arrest, police learned that Espina had an arrest warrant for attempted homicide issued by a trial court in Maasin City.

Espina denied selling illegal drugs and knowing Espinosa, said to be the biggest drug lord operating in Eastern Visayas and parts of Cebu.

Kerwin remains at large and is being hunted down by the police. Espina, however, admitted he had been a drug user since he was 18 but recently planned to surrender to the police amid its intensified illegal drugs campaign.

Espina, 54, was born in Cebu City but spent his childhood years in Maasin City, Southern Leyte. He returned to Cebu in the 1980s and settled down in Barangay Lahug, Cebu City.

Espina got married to a Cebuana and had four children — one of whom died.

In February 2016, he had a spat with his wife, prompting him to move out of their home and rent a room at Allsons Inn in Barangay Lorega.

“I’m really depressed because of my broken relationship with my wife,” he said.

While at the pension house, he triggered the suspicion of the staff after he bragged that he and Kerwin were friends.

It didn’t also help that he would not allow anyone to enter his room even to bring him food or clean it.

The pension house staff asked the police to conduct surveillance operation on their client. The police acceded to the request.

Found inside the room were a plastic bag of dried marijuana leaves, a sachet of shabu, assorted drug paraphernalia, .45 caliber pistol, a .22 revolver, ammunition, two cellphones, a laptop, and two black bonnets.

Charges for illegal possession of firearms and violation of the Comprehensive Dangerous Drugs Act of 2002 will be filed against Espina at the Cebu City Prosecutor’s Office today.

Chief Supt. Noli Taliño, director of the Police Regional Office in Central Visayas (PRO-7), said Espina’s arrest was a good example of the collaboration between private citizens and policemen.

“The police got an information from someone and we verified it. And then, bingo! We got him (Espina),” he told reporters.

Taliño said they were conducting an investigation to find out Espina’s connections, at least in Central Visayas.

“Kerwin’s cohorts transfer from one place to another so that the police would have a hard time tracking their whereabouts. It’s possible that some of them are hiding in Cebu from Leyte,” he said.

Taliño also defended the team that arrested Espina even without any authority from the court.

“We were supposed to conduct a drug bust operation. But he opened the door and there were contraband found inside his room. Of course, the police can arrest him,” he said.

Read Next
4 CASES VS. OSMEÑA