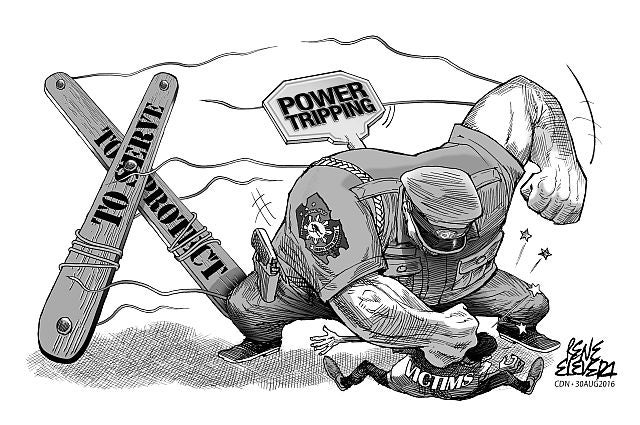 Hopefully, by the time this comes out, more light would have been shed on the brazen traffic altercation that occurred at the foot of the Mandaue-Mactan bridge last Saturday.

The perpetrators, who included PO3 Renato Inot and his unidentified armed companion, were responsible for beating up truck driver Crispen Ricarte, hitting his supervisor, Leonardo Orcullo, and threatening reprisal on onlookers along A.C. Cortes Avenue, Barangay Looc, right in front of the University of Cebu Lapu-Lapu Mandaue (UCLM) gate.

It would not have come to light were it not for a video that showed Inot and his armed companion inflicting abuse on Ricarte and Orcullo when Inot was unable to overtake them at the bridge despite several attempts.

While Inot was immediately relieved by Supt. Roberto Alanas, Mandaue City police chief, after the video went viral on Facebook, we would have wanted to hear Inot’s and his companion’s side on the incident even if the video showed their guilt, and it can be used as evidence in court by Ricarte and Orcullo if they do decide to file charges against them.

Why did they do that? Could they have been under the influence of drugs or alcohol or both, or was it just yet another case of power tripping and road rage? Or could they be chasing some criminal suspects, and they were aggravated by Ricarte’s delayed response to give way to them at the bridge?

Or is it because they held a grudge against Ricarte and Orcullo? Call it curiosity or just plain obligation to hear both sides of the story, but whatever their reason, it simply doesn’t justify what Inot and his cohort did to Ricarte and Orcullo.

If they were chasing suspects, they could have asked for police assistance and not waste time beating up Ricarte. And Inot’s dismissal simply isn’t enough to teach him a lesson since legal punitive actions should be taken against him and his cohort if only to warn other police officers against committing such abuse.

If it is just a simple case of road rage, then Mandaue City Hall should take up more stringent action to deal with and prevent these situations from happening again.

There may be a shortage of traffic personnel, but it had yet been established that they can seek police assistance if the situation such as last Saturday’s incident calls for it.

We do understand that Mandaue City recently bought some drones to not only help them monitor the traffic situation but likely monitor cases of altercations and violence. We hope that they can allocate a budget to buy more of these drones to act as their eyes and ears on the sky and enable them to immediately mobilize personnel.

We also hope that Inot and his cohort be immediately arrested and made to answer for their crimes. Their behavior has no place in Mandaue City’s streets or anywhere in Cebu and the rest of the country.