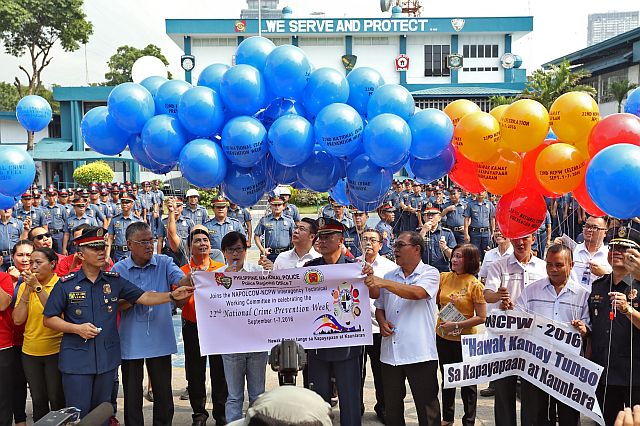 “Crime prevention is the concern of everybody. Community involvement is a vital requisite in the war against illegal drugs and criminality,” said Chief Supt. Noli Taliño, director of the Police Regional Office in Central Visayas (PRO-7), during the kick-off ceremony of the 22nd National Crime Prevention Week yesterday.

Representatives of the Commission on Human Rights, Bureau of Fire Protection, and other agencies also participated in the activity.

They released balloons and blew whistles as a sign of the fight against all forms of criminalities.

Dino in his speech during the event encouraged families to help care for victims of illegal drugs and not cast them away as the government’s illegal drugs campaign involved not only bravery but also care.

“I’m calling the families of the drug users who have surrendered and are willing to take the rehabilitation to please do not condem them for it will not help. Mind you, one important element of rehabilitation of drug users is the family,” Dino said.

“Absent the family who is the source of support, moral, spiritual, financial, and even filial rehabilitation will become a never-ending cycle for the drug user. He will never be healed. He will go for rehabilitation again and again,” he added.

Dino also cited his plan for a cash-for-work program for drug surrenderers.

He said he believed President Duterte’s anti-illegal drugs campaign would be successful.

“How do we prevent crimes? It may not be simple but it’s not as complex as you think. Let the would-be criminals realize that if they will not follow the law, they will really get caught, and they will be punished,” he said.

Chief Supt. Talino, for his part, reminded the public to be more vigilant as the “ber” months begin.

In previous years, he said crimes usually increase from September to December since robbers and thieves looked for victims so they could have money for the Christimas season.

“We are intensifying our security preparations to go after those who will take advantage of the situation,” Taliño said in an interview.

He said PRO-7 will deploy more policemen to patrol the streets and to prevent crimes.

“I advise people to avoid secluded areas so they won’t fall prey to criminals,” Taliño said.