Not just for show 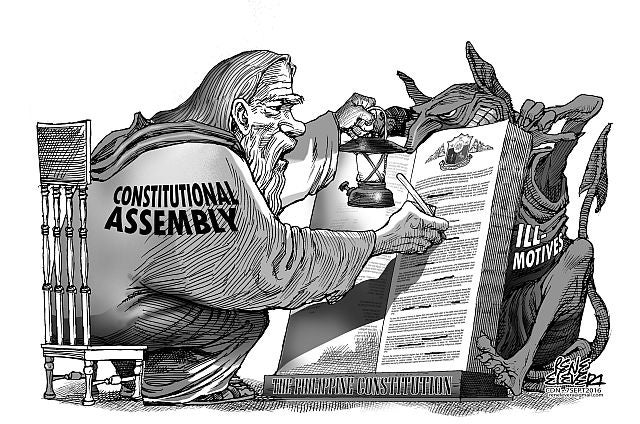 When the plan to amend the Constitution through a constituent assembly was confirmed by President Rodrigo Duterte, not a few were concerned that Congress, comprised mostly of the old rich and powerful, would introduce provisions that would be beneficial to them like term extensions.

But a visit by House Speaker Pantaleon Alvarez, who swore in several Cebu officials into the PDP-Laban fold, mentioned one interesting bit: that there would be representatives or delegates who would form a small Constitutional Convention tasked with crafting amendments for a proposed federal system for the country.

Under the proposed setup, the delegates, who may include noted veteran legislator Antonio Cuenco of Cebu City’s south district and even former Senate president Aquilino Pimentel Jr., will introduce provisions that would make the federal system a reality and present these to Congress for deliberation and final drafting.

This may be a small concession given by Alvarez and others in the majority bloc to those who still prefer a Constitutional Convention as the sole mode for amending the Constitution.

The delegates will act as a sort of bicameral conference committee in Congress, a group composed of representatives from both the Senate and the House who are tasked to review and reconcile the differing views and suggestions in a proposed bill before it is presented for final draft to both houses of Congress and then presented to the President for signing.

The delegates will, however, be selected based on their qualifications and expertise in the Constitution. We can only hope that more delegates from sectors that are underrepresented will also join their more illustrious counterparts in crafting the proposed federal system.

Among the changes being proposed by Alvarez is the abolition of the Sangguniang Kabataan (SK) which he described as a total waste of resources (to the tune of P4 billion) since most of the elected youth leaders are distracted by their studies to begin with.

But that debate is for another day. What is important is that the Duterte administration is taking great pains to assure the public that the process of amending the Constitution won’t be confined to the congressional elite.

That’s a step in the right direction; but as to whether the output produced by the Constitutional delegates will be heeded or ignored completely by Congress is another matter altogether.

We hope that these delegates won’t be appointed just for show and that their output be recognized and incorporated by Congress to create a federal system of government that is both effective and responsive, and upholds the sovereign will of the Filipino people.