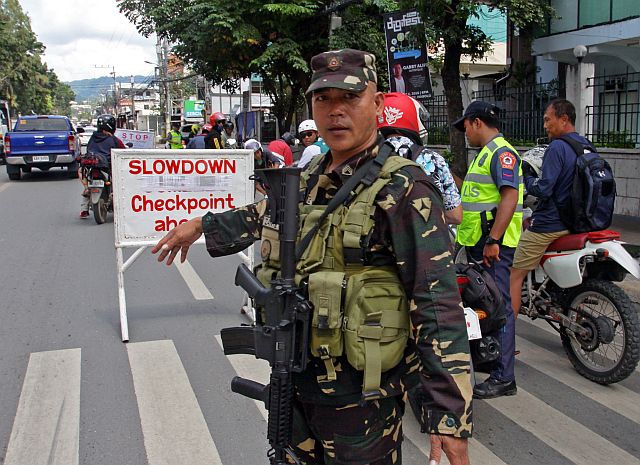 Melanie Ng, Cebu Chamber of Commerce and Industry (CCCI) president, said this when asked about impact of the the heightened security on the businesses in the city.

“Everything is very peaceful. The threats have not created adverse impacts to our businesses,” Ng said in a phone interview.

“If anything, she added that it is a positive sign that the government, most especially the law enforcing bodies, mean peace and orders as a serious business. “We should not create panic for this will affect everyone of us,” she said.

The presence of soldiers and police in full battle gear to secure residents in the city especially in public places especially in malls, airports, ports and bus terminals had not affected the business sector.

She said that they would still push through with the string of business events in the coming weeks since this had not hampered in any way the productivity of the business sector.

However, Glenn Soco, Mandaue Chamber of Commerce and Industry (MCCI) president, said that the security situation had in a way affected the business community in Mandaue City in that the people at this point were “shying away from public places.”

Soco said that the MCCI is leaning towards urging the government to make the installation of CCTV cameras mandatory in all places of business, big or small.

“We are one with the government and the law enforcers in securing peace and order in the city,” he said.

However, some people in the streets of Cebu City felt wary of the presence of police officers and soldiers patrolling places in the city where the people gather.

Norjen Gointiveno, who was taking a break from his duties as a sandwich maker in a bagel store in a Cebu City mall, said he believed that the police were serious about the security.

Gointiveno said that sometimes, when he sees the police patrolling the mall, he would anxious for his safety and that of his customers especially during times when the mall gets heavy foot traffic.

He also noted a decrease in mall goers especially after the Davao bombing news made the rounds in social media.

Ahmie Iburan, a 31-year-old mother from Barangay Oppra, Cebu City, said since the Davao bombing, she had limited taking her two boys to the mall.

Iburan said that it was best to stay home rather than in frequent public places and be exposed to risks.

Iburan was taking selfies with her two little boys at a mall when interviewed by CDN.

Iburan, who also runs a sari-sari store in her house, said she had also made it a point to be quick in buying goods in supermarkets since the news of the Davao bombing.

Rovina Banate, a high school teacher who lives in Barangay San Nicholas, Cebu City, said that the presence of soldiers and policemen in public places had helped in safeguarding the civilians, but she hoped that this would prevent others from thinking of doing harm to others.