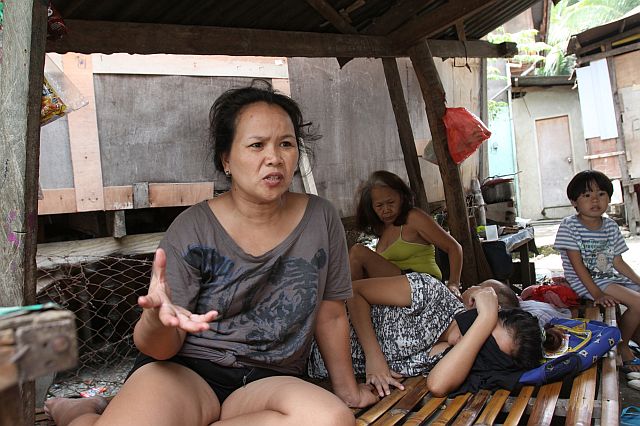 HEALTH DANGER. Cheryl Aguimas (left) and her family live along a road just 400 meters away from the Inayawan landfill, and she complains that the smell is becoming worse, not just from the dumpsite but also from the garbage trucks that pass by her house every day. Bare-faced scavengers (upper photo), on the other hand, appear immune to
the stench (CDN PHOTO/JUNJIE MENDOZA).

Can rehabilitation efforts still save the Inayawan landfill in Cebu City?

According to the Department of Health in Central Visayas (DOH-7), it’s about time that the garbage dumpsite is closed and no amount of rehabilitation can make it a suitable sanitary landfill area.

DOH-7, in a report released following a site inspection on the 15-hectare facility, “highly recommended” the immediate closure of the landfill due to lack of sanitary requirements and several environmental, health and community safety issues.

The agency also cited the high risks faced by residents, establishments, scavengers and other people within the vicinity of the landfill in acquiring different types of illnesses if the garbage dumpsite continues to operate.

“The disposal area is not anymore suitable as a sanitary landfill even if rehabilitated considering its location within the city, the number of residents and the increasing population of the city, the neighboring cities and towns, the expected increase in the number of commercial centers, transportation and tourists concerns,” read the DOH-7 report.

The inspection report was prepared by Henry Saludar, DOH’s regional sanitary engineer, after a site assessment made by the health agency last September 5.

Among others, the DOH-7 inspection team spoke to engineers Rogelio Legaspi and Danilo Gabuano, the landfill’s supervisor and manager, respectively, and other stakeholders before finalizing the report.

Garganera, who has been pushing for the closure of the landfill, was the one who requested DOH to conduct the assessment.

Garganera said the issue is no longer whether or not it is cost-efficient to operate the landfill because its continued operation has now become a health issue that the city government needs to immediately address, especially with the growing number of complaints on the foul smell emanating from the landfill.

“This is a health issue. So it concerns all the Cebuanos, and then if you continue the operation of the landfill, it’s like throwing good money over bad. It cannot be rehabilitated anymore. It already outlived its life. That was supposed to be (operated for) seven years (only). It is now 17 years already,” Garganera said in a press conference he called yesterday.

But as of yesterday, the debate among city officials continues as Cebu City Mayor Tomas Osmeña is firm on continuing to use the Inayawan landfill.

“We are addressing the smell but the council refuses to let us buy anapog (limestone) to cover the smell. The council seems to be promoting a hidden agenda of (giving benefit to) a private hauling contractor (who charges) up to P600,000 a day,” Osmeña said in a text response when sought for comment to the DOH-7 findings and Garganera’s statement.

He added that if DOH 7 or the Environmental Management Bureau (EMB) of the Department of Environment and Natural Resources in Central Visayas (DENR-7) will stop him from dumping at Inayawan, then he said he will dump the garbage at the legislative building of Cebu City Hall, or at the South Road Properties (SRP) or at the Malacañang sa Sugbo.

The mayor again rejected dumping the garbage at the Consolacion landfill, saying it will be like “throwing away millions of money.”
Among others, the mayor pointed out that the city and the barangays don’t have enough garbage trucks to efficiently collect and bring the garbage to Consolacion town every day.

But DOH-7, in the report sent by Health Regional Director Jaime Bernadas to Garganera, pointed out that aside from the fact that the capacity of the landfill has already lapsed, it also has no operating permit from the DOH and a sanitary permit from the Cebu City government itself.

The landfill also did not meet the required 200-meter buffer zone from dwellings and habitation areas and has no covering for refuse since the city started operating the facility again last June.

The facility also does not have a shovel blade-bulldozer equipment which can regularly push the protruding refuse towards the center of the landfill and can pour filler soil to cover the refuse to a thickness of at least six inches.

This, according to DOH, violates several laws and regulations including the Clean Air Act of 1999, the Ecological Solid Waste Management Act, the Sanitation Code of the Philippines and the Environmental Compliance Certificate (ECC) requirements of the DENR-EMB.

The Inayawan Sanitary Landfill was constructed in 1995 and began operating in 1998. It was only supposed to last up to 2005. Today, it still receives an estimated 450 tons of garbage daily.

DOH said the continued dumping has caused the “over pile-up” of the garbage up to the borders of the facility.

DOH said the mountain of garbage has reached around 120 meters at the side near the Filinvest Subdivision; around 40 meters high at the Cogon Pardo side; and around 10 to 20 meters in the Inayawan side.

“The residents, commercial centers, shanties and scavengers near the dump site are at high risk of acquiring different types of illnesses due to pollution considering the current status of the dumpsite,” the report said.

Garganera said that with the DOH finding, he again hoped that Osmeña would reconsider his stand.

He said he will also raise the issue in the city council’s regular session today. If there will be no positive response from the executive department by today, Garganera said he will make good on his earlier threat to file a petition for a Writ of Kalikasan in the Court of Appeals (CA) in order to compel City Hall to close the landfill by tomorrow (Wednesday).

He also criticized the mayor’s plan to give P5,000 to each of the students of the University of Cebu Maritime Education and Training Center (UC-METC) campus in Barangay Mambaling.

“It’s like bribing. It’s like you tell them to just smell the other way around because of the money. What about their staff? Their teachers? And how many schools are there, public and private, day care centers, churches. Not to mention business establishments and condos in SRP,” Garganera said.

But Osmeña also defended his plan, saying that he will also consider giving cash to other nearby residents.

“Giving funds to college students is just a variation of our college scholar program, prioritizing Mambaling college students. I will consider giving to other nearby residents as soon as the council will grant the student aid program,” the mayor said.

Garganera, however, said they planned to reject the mayor’s proposal as it will set a “bad precedent” for others affected by the smell to also collect money from City Hall.
More importantly, giving the people money won’t solve the problem of the awful smell emanating from the facility, stressed Garganera.