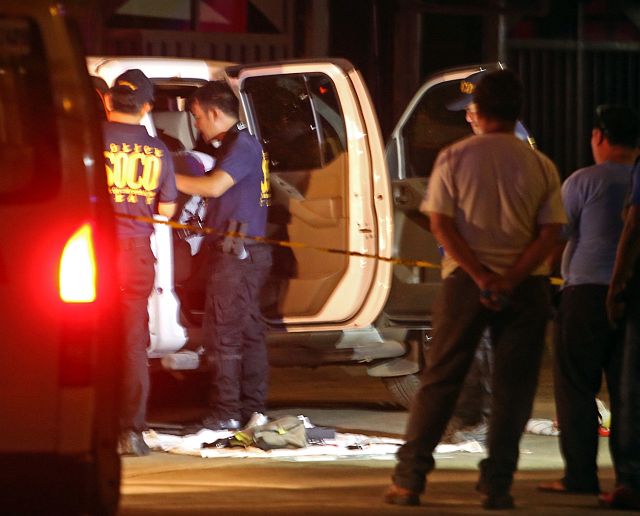 A suspected drug dealer was shot dead by police operatives during a buy bust operation conducted in Prince Court Hotel Mabolo, Cebu City Monday night when he allegedly tried to shoot it out with policemen.
(CDN PHOTO/LITO TECSON)

AS the government war on illegal drugs continues, two more suspects were shot dead in separate incidents in Cebu City Monday evening; with one killed in a motel during a police operation, and the other by an unidentified gunman on the street.

According to Chief Insp. Dexter Calacar, spokesperson of the Police Regional Office in Central Visayas (PRO-7), when Sanchez noticed that he was transacting with a police poseur buyer, he engaged the operatives in a shootout.

The suspect suffered gunshot wounds on his body and was declared dead on arrival at the Mandaue City Hospital where he was brought following the shooting.

About four hours later, in Barangay Labangon Cebu City, another man who was walking along Katipunan Street was shot dead by an unknown assailant.
The victim, who had yet to be identified, bore a tattoo on his right chest which read “Jaggy Diaz.”

Senior Insp. Manuel Cañete of the Cebu City Police Office’s homicide division said a witness narrated that the victim was walking along the street when the assailant shot him from behind.

The victim reportedly pulled out a gun from his backpack and tried to fire back at the suspect; but the victim’s gun malfunctioned.

Recovered from the crime scene were seven empty shells of a 9 mm pistol, and a KG-9 submachine gun allegedly owned by the victim.

Po3 Nicky Carlo Plarisan said police led by Chief Inspector Francisco Fajardo responded to a call from a “concerned citizen” reporting the presence of an armed person in the area.

Upon reaching the place, police arrested Junrey Racho Maquilan, a resident of the barangay, for brandishing his gun.

Recovered from Maquilan’s possession were a .38 revolver with 6 live bullets and 10 small sachets containing a substance believed to be shabu, police said.

In another operation still in Calajoan, Minglanilla three men found visiting a drug den, reportedly maintained by a certain “Maniac”, were arrested.

The suspects were identified as Joseph Aliden, Alfredo Caparas and Argue Acruz.

Recovered from his possession were 10 small sachets of illegal drugs, according to police.