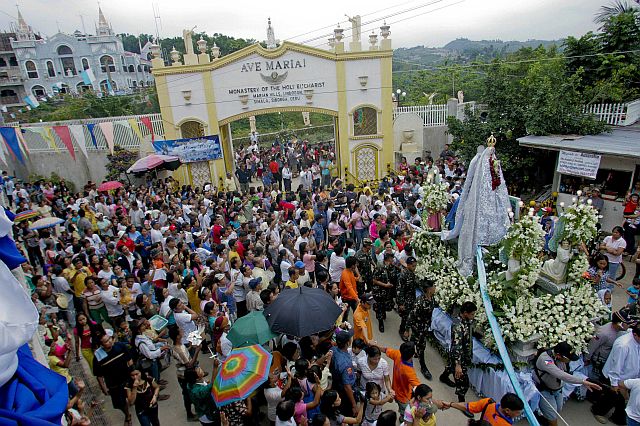 Catholic devotees join the procession of the image of the Blessed Virgin Mary as they celebrate her birthday in this file photo taken on Sept. 8, 2009 in Lindogon. (Photo by Victor Kintanar)

The statue of the Blessed Virgin Mary in Sitio Lindogon, Barangay Simala, Sibonga town, southern Cebu will arrive today in Cebu City at around 11 a.m. through a holy convoy.

This is Mama Mary of Lindogon’s first visit in eight years.

The convoy, which consists of 20 four-wheeled vehicles and 30 police motorcycles, will leave Lindogon at 8 a.m. today. From there, it will pass through Talisay City, turn right to the South Road Properties (SRP), then to Plaza Independencia. It will then pass by Radisson Blu Hotel and will turn left to Pope John Paul II Avenue and enter the IEC Pavilion.

A Holy Eucharistic celebration to be officiated by Archbishop Jose Palma will be held at noon.

As a tribute to the image, a musical concert titled “For Mama Mary: It’s All About Her” will be staged at 7:30 p.m. featuring Cebuano talents Girlie Lapinid Laspiñas,
Izarzuri Vidal, the Mandaue Children’s Choir, renowned quartet Sakdap and singing priest Fr. Jonas Mejares. Tickets to the concert are priced at P700, P500 and P200.

The proceeds will be used in the construction of classrooms for the students of the Our Lady of Lindogon Foundation Inc.

From the IEC Pavillion, the convoy will turn right, going to the New Imus Road, pass by the Mabolo Church, turn left on the old MJ Cuenco Avenue, going through Plaza Independencia and turn right on Osmeña Boulevard before reaching the Basilica.

Senior Supt. Rey Lyndon Lawas of the Police Regional Office (PRO) 7 said that roads surrounding the church and some roads near Osmeña Boulevard will be closed for the convoy.

A send-off mass to be concelebrated by Cardinal Ricardo Vidal will be held at 10 a.m. on October 9, Sunday, before the image will be brought back to Lindogon at noon.