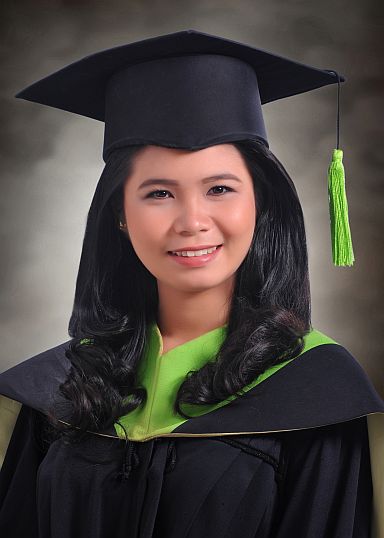 A FACTORY worker’s daughter not only achieved her dream of being a chemist, but she did it with a bang when she also landed in the top 10 of the Chemist Licensure Board Examination.

Danie Mae D. Ybañez, 21, was the lone topnotcher from Cebu among the 559 examinees who passed the exams.

Ybañez ranked third with an average of 90.75 percent, according to Professional Regulation Commission (PRC), which released last Friday the results of the board examinations.

According to the PRC, 1,019 examinees took the Chemist Board Exams nationwide last Oct. 4 and 5.

Mikel Jason Allas of De La Salle University in Manila topped the exams with an average of 93.50 percent.

“I learned about the results inside the jeepney on my way home from a prayer meeting,” said Ybañez, who is a Bachelor of Science in Chemistry graduate at the University of San Carlos.

She checked the PRC website on her cell phone. At first, she did not see her name on the top examinees list.

When she reviewed the list and saw her middle name on the top 10 list, she said she was overwhelmed with emotions as she was not expecting to read her name on that list.

“I was wiping my tears when I was inside the jeepney, and (I was) feeling overwhelmed (with emotions),” she said.

She enrolled herself in a review center at USC as part of her preparation for the incoming examination.

Ybañez said that she considered herself a self-taught student and she learned her lessons by reading a lot of books since college.

Since she already read a lot of books and other references about Chemistry, Ybañez said the knowledge she learned from these books helped her to relax and to give more time to answer the questionnaires.

The 21-year old topnotcher advised the incoming examinees to pursue knowledge as early as high school and college.

“Knowledge is a step by step process. You can’t acquire knowledge overnight. It takes years to develop diligence and love on what you take. I believe that in order to succeed, there is passion and love of what you do,” she said.

A native of Barangay Kalawisan, Lapu -Lapu City, Ybañez was already an achiever since she was an elementary student.

She spent her elementary years in Lapu -Lapu City Central School and graduated as first honorable mention of their batch.

She said she started her love for Chemistry when she was in third year high school and this paved the way to her taking up BS Chemistry in college.

She became a scholar in the Department of Science and Technology (DOST) and at the USC.

“There were times that you were tested (challenged) during the review but God provided,” she said.

She said that her mother, Mecil Ybañez, 41, who worked as factory worker in Lapu-Lapu City, could not provide for her immediate financial needs to sustain her educational pursuits.

She said this is because her mother had also to take care of her two siblings.

After topping the board examination, Ybañez plans to pursue her doctorate degree in United States of America (USA).