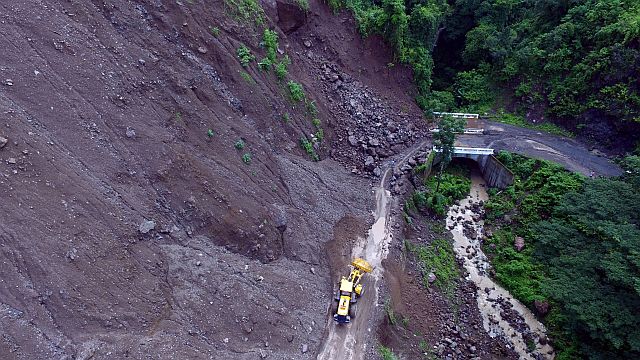 ROAD CLOSED: A road contractor’s heavy equipment arrives to clear the Manipis Road of rocks and loose earth that covered the road link in Barangay Manipis, Talisay City. Residents said the landslide happened on the evening of Oct. 8, 2016.

The national road in Barangay Manipis, Talisay City was rendered impassable to four-wheeled vehicle yesterday after a series of landslides hit the area since Friday night, covering a wide portion of the road with boulders and loosened soil.

Manipis Barangay Captain Emma Cabiluna told Cebu Daily News yesterday that the road was completely impassable for 10 hours until villager workers cleared enough section of the road to make it accessible to motorcycles.

At 1 p.m. yesterday, two-wheeled vehicles could pass through the road but they have to negotiate through rough sections still blocked by debris and rocks, with the assistance of barangay tanods (village watchmen) deployed to guide motorists.

The landslide did not only affect the some 2,400 residents of Manipis but the adjoining villages of Campo 6 and Campo 7, also both of Talisay City. It also cut off the Talisay access road to Barangays Sinsin, Sudlon I and Sudlon II, all of Cebu City; and to Barangay Campo 8 of Minglanilla town.

Cabiluna said the Manipis Road has become prone to landslide, particularly after a heavy rain, following the magnitude 7 earthquake that hit Bohol and Cebu in October 2013.

“Naa nay dakong liki paghuman sa linog. Unya naghinay-hinay siya og katagak (There was a big fissure on the road after the earthquake. That’s when rocks and soils began to slowly cascade down to the road),” she said.

Last August 2, two motorists were hurt when a landslide occurred just as they were passing through the road.

Cabiluna said a team from Provincial Disaster Risk Reduction Management Office (PDRRMO) led by its chief, Baltazar Tribunalo, was in the area yesterday to assess the situation.

Marian Codilla, information officer of Mines and Geosciences Bureau in Central Visayas (MGB-7), on the other hand, said that Barangay Manipis is among the eight landslide-prone villages in Talisay City. The others are Barangay Proper, Camp 4; Zone 1, Candulawan; Campo 2, Jaclupan; Iba, Lagtang; Caduldulan, Lawaan 3; Campo and Purok 7, in Tapul.

Codilla advised the public to take precautionary measures especially if they passed by the area.

He said Manipis Road could not not be abandoned because it is serves as an access road for limestone and coal miners operating in the area.

Engineer Joselito Sayson, officer-in-charge for construction of DPHW-7, said they sent a team to clear the area of debris. But Barangay Manipis is not completely isolated since it could still be reached through the Transcentral Highway, passing through Barangays Campo 4 and Campo 7, he added.

Hopefully, workers would be able to completely clear the road by today since no rain is expected to be experienced in Cebu at daytime today.

The Philippine Atmospheric, Geophysical and Astronomical Services Administration (Pagasa) said it will be sunny in Cebu today and tomorrow except for some isolated rain showers in the evening.

The normal average rainfall in Cebu for October is 199.9 millimeters. As of 2 p.m. yesterday, Pagasa Mactan has recorded 84.4 millimeters of rain that fell in Cebu this month.

Read Next
‘Walk with the Force’ for little Jann