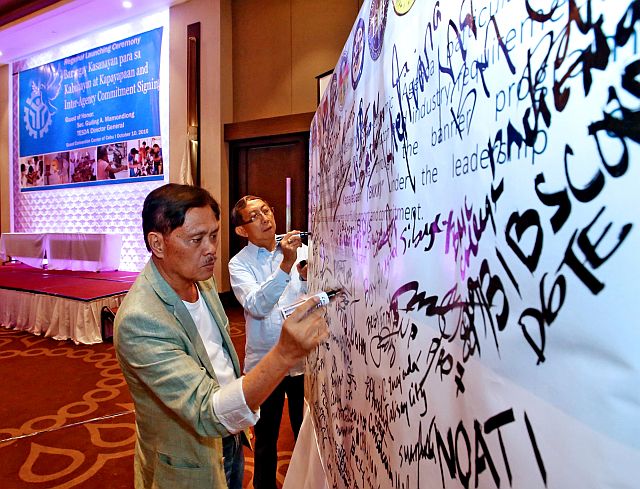 CEBU’S drug surrenderers will get every chance to earn a decent livelihood in order to become productive members of society, the Technical Education and Skills Development Authority (Tesda) said yesterday.

During yesterday’s launch of the agency’s regional skills training program, Tesda Secretary General Guiling Mamondiong said they will give drug surrenderers the means “to have a livelihood.”

Tesda signed an agreement with the Philippine National Police, Department of Social Welfare and Development, and Department of Health to provide skills and livelihood training to former drug dependents under the program.

Mamondiong said they are ready to take in former drug dependents upon the recommendation of the PNP and other concerned agencies.

From July 1 to October 3 this year, the Police Regional Office recorded more than 72,000 suspected drug pushers and self-confessed drug users that surrendered amid “Operation: Tokhang” in the region.

“Since the problem is there already, providing training for drug dependents is a priority. We just can’t leave them hanging,” Mamondiong said.

Tesda allocated 30,000 scholarship slots for Central Visayas with the beneficiaries to be recommended by barangays in the region.

Mamondiong said they sent letters to all 42,000 barangays in the country asking local officials to provide a list of recommended scholars and the kind of skills they need training on.

He said scholars can avail of trainings on self employment, local or overseas employment, and a program for families as well.

“This is the first time barangays will be given a chance to nominate their scholars,” Mamondiong said.

Since the Duterte administration announced that it will ramp up infrastructure spending this year, the official said he expects more people in Cebu will need skills training related to construction.

Mamondiong said TESDA set aside P7 billion for all skills and livelihood trainings this year. The agency’s flagship program was launched in Regions 8 and 1.

Read Next
Davide, officials ask for extension from court