Raphael and his ostrich 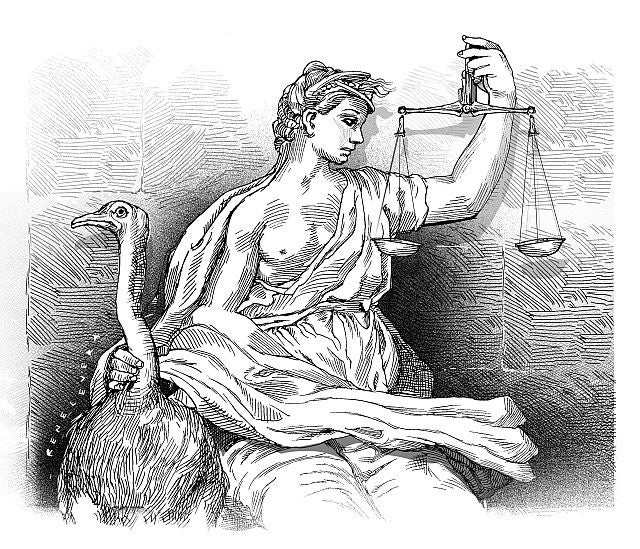 That Justice is a blind goddess
Is a thing to which we black are wise:
Her bandage hides two festering sores
That once perhaps were eyes.

Hughes was a leader of what came to be called the “Harlem Renaissance,” the flowering of African-American art in the 1920s in New York City. Many consider “The Negro Speaks of Rivers” as his signature poem.

In “Justice,” we sense Hughes’ simmering anger over how the American justice system treats African-Americans. He uses the image of the Roman goddess Justitia, or Lady Justice, who has a blindfold and holds a balance and a sword. The blindfold means that Justice must be objective; the balance, that she should exactly measure the strengths of the claims of the parties; and the sword, the power of Reason and Justice.

The force of the poem comes from its irony. “That Justice is a blind goddess / Is a thing to which we black are wise.” In other words, based on their experience, the African-Americans know better than to grant that American justice has no bias against them. He describes Lady Justice as having lost her eyes, which have become sores and which, instead of a blindfold, a bandage now covers. In effect, Hughes tells us that the Negro in American cannot get justice.

In his Gospel, Luke writes about a widow who, in the parable of Jesus, could not get justice.

“There was a judge in a certain town who neither feared God nor respected any human being. And a widow in that town used to come to him and say, ‘Render a just decision for me against my adversary.’ For a long time the judge was unwilling, but eventually he thought, ‘While it is true that I neither fear God nor respect any human being, because this widow keeps bothering me I shall deliver a just decision for her lest she finally come and strike me.’”

I read somewhere that, in the time of Jesus, judges held the hearings in tents, which suggests that they travelled from place to place. Moreover, they chose their own agenda, selecting what cases to hear. People interested in having their cases looked into often bribed the judge’s assistant to have the hearing of their claims scheduled ahead of the others.

Two factors conspired against the widow: the judge did not fear God, and he had no respect for any human being. Which means that he acknowledged no other brand of justice than his own. And yet the widow was undeterred. She importuned the judge for justice, and not just his brand of justice but the right brand of justice, the one that humanity desires from blindfolded Justitia. Initially, the judge resisted but in the end felt bothered by the widow’s persistence to give her what she wanted.

As a judge, I met a similar personality, likewise a widow, who earned a living as a laundry woman. Daily she waylaid me on the entrance to the church, pleading for her son (a carwash boy) who was facing a case for human trafficking (pimping). Whatever about the guilt of her boy, I admired her motherly concern. It seemed to me that her persistence had reached biblical proportions, and I did play the part of the unjust judge, not in his attitude to God and man but in rendering what I thought was a just decision.

In fact, through the parable, Jesus tried to convey the need for unwearied praying, stressing that if one could get a hearing from so wicked and dishonorable a man as the unjust judge, how much more could one secure an audience with God, a loving Father who cares for his children.

When the wife and I visited the Vatican museums, we saw in one of the rooms devoted to Raphael’s works a painting entitled “Justice,” portraying the usual figure of a woman, this time without a blindfold, holding a sword. But instead of a balance, her other hand rests on the neck of an ostrich. Nobody knows why. Perhaps the ostrich symbolizes Justice too, and the lady keeps her hand on its neck to keep the bird from burying its head and failing in its assessment of the facts.

Or perhaps Raphael included the ostrich to suggest the role of imagination in the dispensation of justice. Weigh the evidence, yes, but at the same time be creative in resolving the conflict to reach a truly meaningful decision because the law can become the enemy of justice. And this would require not anymore of the parties importuning the judge for justice but of the judge importuning the heavens for wisdom.