Karen strands over a thousand in Cebu ports 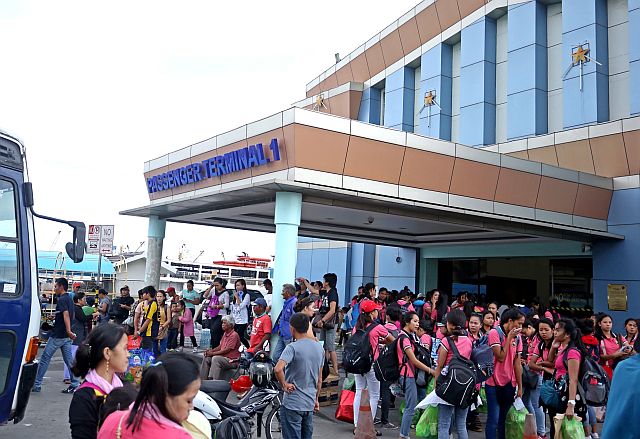 A big throng of passengers wait for their turn to enter the terminal at Pier 1 in Cebu City amid numerous sea travel cancellations due to typhoon Karen.
(CDN PHOTO/LITO TECSON)

OVER a thousand passengers were left stranded in Cebu City ports after four inter-island vessels suspended their trips due to the bad weather spawned by typhoon Karen.

As of last count, 1,102 passengers were stranded at the ports here following the cancellation of the four trips bound for Manila, Bantayan Island in northern Cebu, and for Tubigon and Tabilaran City, both on Bohol Island, according to Commander Agapito Bibat, chief of the Philippine Coast Guard (PCG) Cebu Station.

“Although only Manila has been placed under storm signal number one, it was also the discretion of the ship captains and companies to cancel the trips for the safety of their passengers and crew,” Bibat told Cebu Daily News.

Bibat said the sea passages in and out of Cebu were from rough to very rough.

Among affected vessel was MV St. John Paul II of 2Go Shipping, which was supposed to leave Cebu for Manila at 9 p.m. yesterday. The vessel arrived in Cebu City on Friday night from Cagayan De Oro to load passengers also traveling to Manila.

According to Bibat, MV St. John Paul II has 960 passengers who were all bound for Manila. Also on board were the 183 crew members the vessel skippered by Henry Ledesma.

He said MV St. John Paul II was docked at Pier 5 in Cebu City and would remain in the area with its passengers and crew on board until it would be safe for the ship to sail out of Cebu.

The cancellation of the trips of passenger vessels Star Craft 9, which were bound for Tagbilaran City, respectively, left a total of 142 passengers stranded. Star Craft
10, which was bound for Tubigon, opted to suspend its trip before it could issue tickets to passengers.

Shuttle Ferry 11, on the other hand, suspended its regular trip from Barangay Hagnaya, San Remigio to Bantayan Island, Bibat said.

Cebu Pacific also posted on their site that a total of 144 one-way flights will be affected today, Sunday.

Typhoon Karen
As of 6 p.m. yesterday, typhoon Karen has intensified and was at the 205 kilometers east of Infanta, Quezon with maximum sustained winds of up to 130 kilometers per hour.
The Philippine Atmospheric Geophysical and Astronomical Services (Pagasa) Mactan placed some areas under tropical cyclone warning signals.

Typhoon Karen is expected to exit Philippine Area of Responsibility (PAR) on Monday.

Romeo Aguirre, weather specialist at Pagasa Mactan said that Cebu will experience an improve weather condition next week despite the possible tropical storm with an international name of Haima is expected to enter  PAR on Tuesday which will be named as “Lawin.”