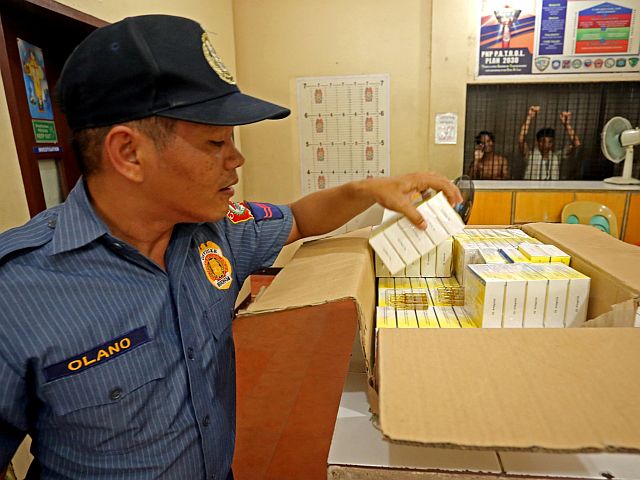 AMPULES of injectable drug believed to be Nubain are being inventoried by personnel from the Parian Police Station in Cebu City after they were turned over to the police unit by four barangay tanods of Kamagayan who were handed the box of drugs by an unknown person (CDN PHOTO/LITO TECSON).

WHERE DID THEY COME FROM?

Were those really Nubain, the restricted injectable painkiller that was reported to have replaced shabu (methamphetamine hydrochloride) as a drug of choice among junkies?

There were 799 ampules containing yellow-colored liquid chemical solutions believed to be Nubain that were turned over to the the Parian police station in Cebu City yesterday morning.

And Parian policemen were now trying to unravel the mystery of these suspected prohibited drugs that were dumped on their laps.

It started shortly before noon yesterday when four barangay tanods manning a van-for-hire terminal in Barangay Kamagayan, Cebu City went to the Parian police to turn over a carton-full of smaller boxes containing ampules of drugs.

The village watchmen claimed an unidentified man suddenly appeared at their outpost located outside of the GT Express Terminal in Barangay Kamagayan, dropping the box of ampules right in front of them before skedaddling out of the tanods’ sight.

PO2 Edadies Bustarde of the Parian police said they would turn over the drugs to the Philippine National Police (PNP) Crime Laboratory at the Police Regional Office-Central Visayas (PRO-7) headquarters for testing to determine what they really were.

Charles Angga, one of the outpost’s tanods, narrated that the man, who was shirtless and clad only in denim shorts and red cap, appeared before them at around 10:30 a.m. carrying the box of suspected illegal drugs in his arms.

“After saying, ‘Sir, wala ko’y labot ana ha (I have nothing to do with that),’ the man immediately dropped the box in front of us then ran away, which prompted me and my companions to run after him,” Angga said in Cebuano.

The tanod said the man, who appeared to be in his late forties or early fifties, ran so fast and went inside a very narrow alley situated some thirty meters from the van terminal.

“Nisulod siya sa gamay kaayo nga agianan unya di na mi kasud. Wa ta kahibawo basin naa siya’y mga kauban didto (The man ran inside a very narrow alley, so narrow that the four of us couldn’t get through. Who knows, he might have cohorts there),” said Angga.

Eager to confirm the contents of the box, the tanods immediately brought the box to the Parian Police Station.

Bustarde said they inspected the box and it was found to contain 799 ampules placed inside 70 product boxes labeled as “Ranitidine Hydrochloride” with brand name “Ranitac.”

Printed on its box is the information that the drug that comes in 25 mg solution per plastic ampule “is for injection.”

According to the Medical Dictionary, an online medical dictionary, Ranitidine Hydrochloride is a form of anti-ulcer drugs that “reduces gastric acid secretion and increases gastric mucus and bicarbonate production, creating a protective coating on gastric mucosa.”

“The people who brought this box to us maintained that the chemical solution was really Nubain. But reading from the labels of the boxes, these are all Ranitidine Hydrochloride, a drug used for treating ulcer,” Bustarde told Cebu Daily News.

To determine the chemical solution, Bustarde said they would have the drugs tested by the PNP Crime Laboratory today.

A detainee at the Parian Police Station who saw the police open the box of liquid drugs told CDN that the drug “looked like the Nubain” that he had tried using.

Before the government went full blast in its crackdown again illegal drugs, Barangay Kamagayan used to be known as the den of Nubain users and pushers.

Bustarde said that users and pushers of the illegal drug coming from various parts of Cebu City would come together in the barangay.

“We used to arrest a lot of Nubain users and pushers before the intensified campaign against illegal drugs. Our detention cell would be cramped with detainees involved in the trade and users of this drug. Every week, we would usually arrest three to four suspects,” Bustarde said.

Nubain is a prescription painkiller sold in drug stores. It was declared a restricted drug by the Philippine Drug Enforcement Agency (PDEA) in 2011 after it was found to be harmful if taken in excessive amount. However, the drug still found its way into the black market traded by drug dealers to their clients-users.

The use of Nubain was supposed to be have tapered over the years, but in August, however, the PDEA in Central Visayas reported to Cebu City Mayor Tomas Osmeña that with shabu supplies going down and its prices soaring higher, drug users and pushers have resorted to a cheaper alternative — Nubain.

PDEA-7 Director Yogi Ruiz reported to the mayor that the government’s relentless war against drugs drastically reduced the supply of shabu in the drug market, causing its price to soar to P6,000 per gram from P1,500 per gram. On the other hand, one ampule of Nubain (nalbuphine hydrochloride), which is an analgesic or painkiller, only costs between P100 to P120, said Ruiz.

The revelation from Ruiz was apparently bolstered by the recent arrest made by elements of Criminal Investigation and Detection Group (CIDG) who, on Oct. 10, nabbed a man for selling 30 ampules of Nubain worth P6,000 to undercover police operatives.

The suspect, identified as Kenneth Caballes, was arrested in a drug bust at T. Villa Street, Barangay T. Padilla, Cebu City after he delivered the Nubain ampules to the CIDG operatives.

Bustarde, on the other hand, insisted there was decline in Nubain and shabu use in Barangay Kamagayan since President Rodrigo Duterte assumed office.

A contributing factor, he said, is the cooperation of residents who have been providing the police with information on the activities of the drug peddlers and users in their community.
But Ruiz said Nubain seemed to have a foothold anew as a drug of choice among users.

Ruiz, quoting PDEA-7 intelligence reports based on a two-week monitoring period, revealed that barangays in Cebu City, which used to be involved in the distribution of shabu, are stocking up on Nubain and selling them to drug users.

He said they were then still verifying reports that the Nubain being sold in Cebu was generic and most probably smuggled from Pakistan.

Ruiz had likewise admitted that PDEA had not been paying much attention to sellers of Nubain since they were considered “street level” or small time pushers. PDEA was more focused on high value targets involving the shabu trade, Ruiz said.

However, he warned that while Nubain is a lot cheaper than shabu, it is also more destructive as it is administered through rapid injection using a syringe.

“As a result, when injecting, especially if the syringe is being shared among users, magkapasahay og sakit (diseases can be passed on). If one has HIV or AIDS, malaria or hepatitis, this can be passed (on) to the other person,” Ruiz said then.

He said that Nubain is an injectable drug commonly purchased by users for a calming sensation that later on induces sleep.
“As opposed to shabu which makes one high, Nubain, on the other hand, is a downer drug,” Tan said in a phone interview with CDN.

He said that other drug dependents even concoct shabu and Nubain together and call it a “Milkshake” to attain a higher level of high although users have now been wary in making the said concoction as it had already resulted to deaths due to its adverse effects.

Tan said that they are still conducting further investigations to determine the main supplier of the drug in Cebu but he noted that they have observed a decline of users and pushers of the said illegal drug basing on their recent illegal drugs operations in the city.

Read Next
A VICTORY AWAY