Ormocanons say goodbye to the ‘man of the masses’ 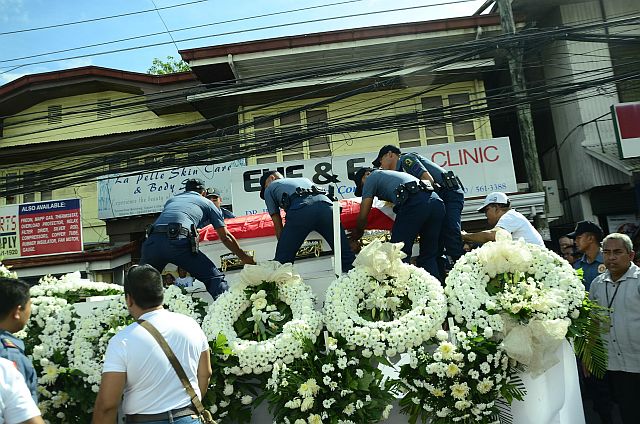 The casket bearing the remains of former Leyte Rep. Codilla is placed on a carriage before heading to Saints Peter and Paul Parish for a Requiem Mass (INQUIRER.net).

ORMOC CITY — Hundreds of supporters of former Leyte representative Eufrocino Mejares Codilla walked for about a kilometer in a funeral procession to the cemetery despite the downpour on Sunday afternoon.

They ignored being drenched as they accompanied Codilla to his final resting place at Ormoc Cemetery in Barangay Can-adieng at about 4:30 p.m. to show their respect to the man who had served them as mayor and 4th district congressman.

Codilla, known as a “man of the masses” here due to his charisma to the common folk, died of lingering illness in Cebu City last Oct 18. He was 83.

His body was brought to Ormoc in the afternoon of Oct. 19 on board a ship.

People from different walks of life went to his wake at his house on Osmeña St.

About 2:30 p.m. on Sunday, the white casket bearing his remains was moved out of his house to Saints Peter and Paul Parish for a Requiem Mass before he was laid to rest at the Ormoc cemetery.

His body was placed on an open carriage adorned with white chrysanthemums by members of the Regional Public Safety Battalion.

But it seemed that the heavens were also grieving with the loss of the former mayor.

The sunny weather suddenly turned gloomy and overcast shortly toward the end of the Mass. When the funeral procession from the church to the cemetery — a distance of about a kilometer — was about to start, heavy rains fell.

But Codilla’s supporters went on to join the funeral march on foot, unmindful of the rains that covered their tears.

But the funeral was not without any smear of politics.

There was the absence of local police in the funeral procession. Only the policemen from Albuera and Kananga escorted the former congressman.

Political rivals, Ormoc Mayor Richard Gomez and wife, Rep. Lucy Torres-Gomez, didn’t pay their last respects to Codilla even if he was the couple’s principal sponsor to their wedding in 1998 before they entered into politics.

Among those who attended the burial on Sunday were Cebu Rep. Gwendolyn Garcia, who was once married to Codilla’s son Winnie, and son Paolo, as well as Cebu City Mayor Tomas Osmeña.

The former congressman was also not given a 21-gun salute due to the absence of the local police.

Former city mayor Engr. Eric C. Codilla, in his eulogy, expressed his gratitude to their supporters, adding that it was fate that put his father to public service.

Codilla, son of a carpenter and a homemaker, was not able to finish college due to poverty.

Eric, who succeeded his father as mayor from 2004 to 2013, said the elder Codilla also failed to represent the Visayas in the Tour of Luzon, a cycling competition.

The former mayor said the son of a major sponsor of the competition was fielded as Visayas representative even if he only came second to Codilla.

Read Next
Fish trader killed while riding with family