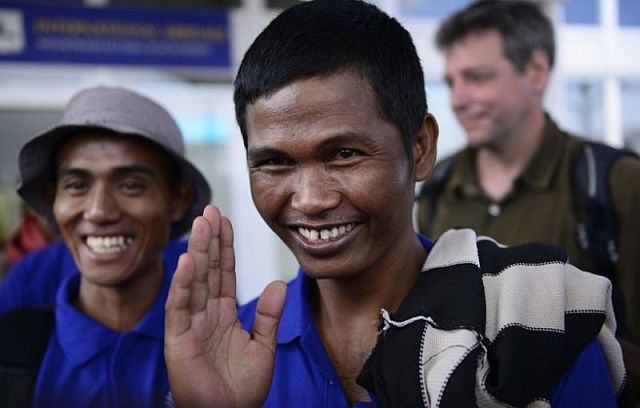 Sailors who had been held hostage by pirates for more than four years, smile as they arrive at the airport in Nairobi, Kenya Sunday (AP).

The sailors arrived in Nairobi, Kenya, on Sunday, and international mediators said the action marks a turning point in the long-fought battle against Somali piracy.

The crew from Vietnam, Taiwan, Cambodia, Indonesia, China and the Philippines had been among the few hostages still in the hands of Somali pirates.

The sailors were the crew of the FV Naham 3, a Taiwan-owned fishing vessel seized in March 2012, said pirate representative Bile Hussein. The ship later sank.

Hussein said $1.5 million in ransom was paid for the sailors’ release. That claim could not be independently verified.

Chinese Foreign Ministry spokeswoman Hua Chunying said in a statement Sunday night that 10 of the hostages were from the Chinese mainland and two were from self-governing Taiwan.

She said the 26 crew members were rescued Saturday “through various efforts.” The Chinese government was grateful to “all the organizations and people who participated in the rescue,” she said.

The 26 sailors will be repatriated to their home countries, John Steed, coordinator of the Hostage Support Partners for the US-based organization Oceans Beyond Piracy, said in a statement.

“They are reported to be in reasonable condition, considering their ordeal. … They have spent over four and a half years in deplorable conditions away from their families,” Steed said.