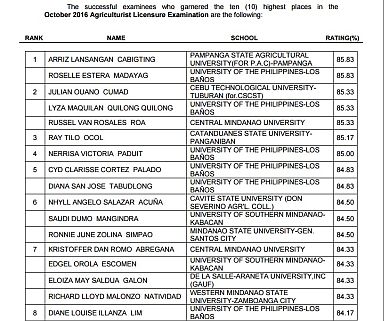 A graduate of the Cebu Technoligical University in Tuburan town is in the top ten of the successful examinees of the October 2016 Agriculturist Licensure Examination .

Julian Ouano Cumad is ranked second after garnering an average score of 85.33 percent, according to the results released by the Professional Regulation Commission (PRC).

PRC announced that 1,790 out of 5,795 passed the Agriculturist Licensure Examination given by the Board of Agriculture in the cities of Manila, Cagayan de Oro, Cebu, Davao, Iloilo, Legazpi, Lucena, Tacloban, Pagadian and Zamboanga this October 2016