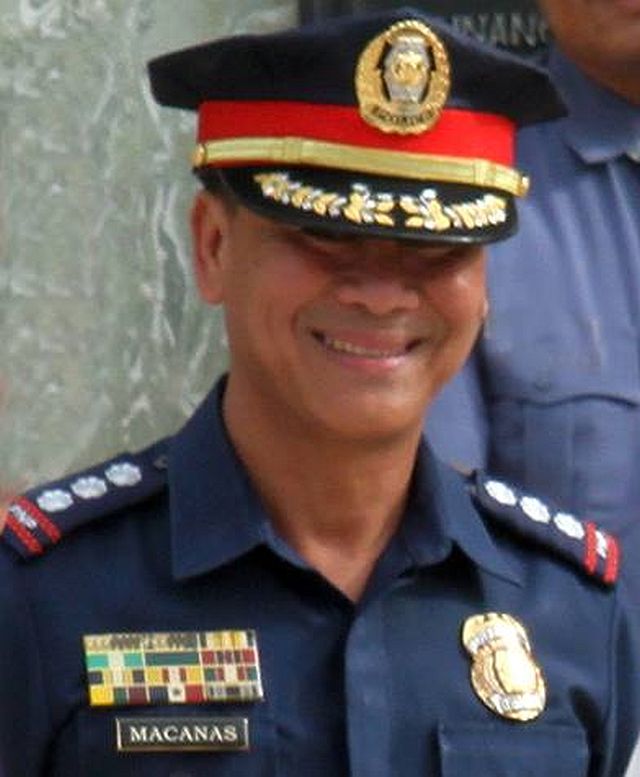 Ten police officers, including the former provincial police director of Cebu and a policeman still in active service in Cebu City, are undergoing administrative investigation for their alleged links to Rolando “Kerwin” Espinosa Jr., tagged as the biggest drug lord in Eastern Visayas.

The others named in the complaint were Chief Inspectors Noel Mondragon, Teodolo Armada and Patrick Vaño; Senior Police Officers 1 Dennis Torrefiel and Erwin Manalo; PO2 Cerilo Luage of the Cebu City Police Office (CCPO); and PO1 Felipe Moralita of the Traffic Management Group (TMG). All were based in Eastern Visayas except for Luage.

Macanas was the Ormoc City police director when Espinosa was released from the Ormoc City Jail in Barangay Alta Vista in 2014 and started building his drug empire, according to Chief Insp. Jovie Espenido, the police chief of Albuera town in Leyte and the overall investigator of the Espinosa case.

It was Espenido who recommended the filing of the administrative complaint against the 10 policemen.

Macanas’ lawyer Frank Malilong said they would not want to issue any statement since they have yet to receive a copy of the formal complaint.

“The problem is all we have now are stories. We do not have a copy of the complaint yet. Until we receive it, we could not answer the issues point by point by point,” he told CDN over the phone.

Macanas, however, wanted it known that the allegations against him were all false.

When he was the director of the Ormoc City Police Office (OCPO), Macanas said the local policemen arrested Kerwin and 12 of the latter’s cohorts on March 5, 2015.

The police filed charges against Kerwin and his group for attempted homicide and illegal possession of explosives, a non-bailable offense.

However, Macanas said he was surprised when the charges against the suspects were dismissed by the trial court.

A motion for reconsideration was filed by law enforcers to contest the dismissal of the case but was eventually denied.

Disappointed by the outcome of the case, Macanas said he requested to be reassigned to the Highway Patrol Group, which he served until he was transferred as Cebu Provincial Police Office (CPPO) director last July 2016.

“How could they say that I am protecting Kerwin? Kinasusuklaman ko ang taong iyan (I detest him). Is this what I get after doing my best in Ormoc?” he told CDN by phone yesterday.

Macanas believed Kerwin’s father, Albuera Mayor Rolando Espinosa Sr., implicated him in the illegal drugs trade to get back at him for arresting the suspected drug lord last year.

Macanas said he did all he could to put Kerwin behind bars, but he ended up being accused as a dirty cop.

“Hiling ko lang na sana intindihin ninyo ako. Malinis ang aking konsensya. Hinding-hindi ako na-associate sa kahit sinong criminal. (All I am asking is for people to understand my situation. I have a clear conscience. I have never associated myself with any criminal),” he added.

Macanas, who has four children, was relieved as director of CPPO last Sept. 30, barely two months after he assumed the position, amid allegations linking him to Kerwin’s illegal drug trade. He is now on floating status at the Police Regional Office in Central Visayas (PRO-7).

He was replaced by Senior Supt. Eric Noble as CPPO director.

“My relatives have been asking me (regarding reports that I was receiving payola from Kerwin). All we could could do was to cry,” he said.

Macanas welcomed the PNP probe conducted by the Philippine National Police, hoping the truth will soon come out.

“I have been waiting for the investigation. This is the only way that I could answer the accusations squarely and formally. There (is) no other way and venue I could defend myself,” he said.

While the investigation is being conducted, Macanas said he reports to the Regional Personnel Holding Administrative Unit (RPHAU) based at Camp Sergio Osmeña in Cebu City.

Chief Supt. Noli Taliño, PRO-7 director, said he was surprised when he received the relief order issued against Macanas.

“I actually have not seen the list nor has any idea about its contents. But he, nonetheless, have the chance to answer the allegations leveled against him and to clear his name,” he said.

Espenido, on the other hand, said witnesses have claimed that Macanas received monthly payoffs from Espinosa as an alleged protector of the latter’s illegal drugs operation. The name of Macanas, as well as his co-accused, also appeared in the so-called blue book of Kerwin that was turned over to the police by Kerwin’s father, Albuera Mayor Rolando Espinosa Sr.

Jambiran, on the other hand, was accused of receiving a weekly payola and a vehicle from Espinosa. He was relieved as the police chief of Calbayog City in Samar province last August after President Rodrigo Duterte named him as an illegal drugs protector while he was assigned in Zamboanga City and later while he was the chief of the intelligence unit of the Ormoc City Police Office in Leyte.

Masauding was the CIDG-8 director when Espinosa was arrested in 2015.

Luage, on the other hand, was allegedly the “coddler” of Espinosa when the latter was still operating his illegal drug trade in Cebu, said Espenido.
Torrefiel, meanwhile, is now detained at the Tacloban City Jail after he was caught in a drug bust operation last July, added Espenido.

Kerwin Espinosa, a native of Cebu City, was said to have started his involvement in the illicit drug trade while in Cebu as the right-hand man of Jeffrey “Jaguar” Diaz, the number one drug lord in Central Visayas. Diaz was killed in Las Piñas City last June.

Espinosa, about eight to 10 years ago, left Jaguar’s group and created his own drug network in Eastern Visayas while based in Albuera, Leyte, the police said.

Rolando Sr. won as town mayor of Albuera, Leyte, last May with his campaign allegedly funded by his son’s drug money.

Last Aug. 2, Mayor Espinosa showed up at the PNP headquarters and surrendered to PNP Director General Ronald dela Rosa, beating a 24-hour deadline set by the President for him and his 36-year-old son Kerwin to surrender, or shoot-on-sight order would be issued against them.

The mayor denied any wrongdoing and tearfully pleaded for his son Kerwin, who was then at large, to surrender. But days later, he went to the Leyte Provincial Prosecutor’s Office to execute an affidavit identifying his son’s connections and protectors.

At least 74 government officials and policemen, as well as 154 civilians were named as protectors in Kerwin’s illegal drug operations.

Once extradited, Espinosa is expected to be brought to the sub-provincial jail in Baybay City, Leyte, where his father is currently detained on similar charges of illegal drugs and illegal gun possession.

He said the PNP is now considering various options on where to detain Kerwin. /with a report from Vicky Arnaiz of Inquirer Visayas

Read Next
P4M drug trail leads to a Bilibid inmate