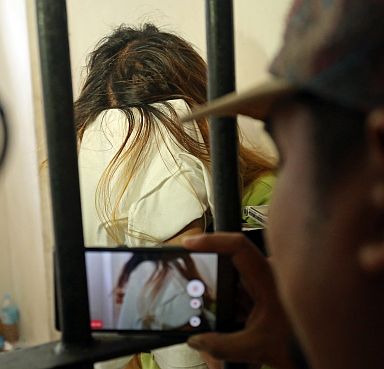 Jerome Sosmeña, the alleged big-time drug peddler caught with P4 million of shabu on Thursday and now detained in the holding cell of the Philippine Drug Enforcement Agency in Central Visayas (PDEA-7), hides his face when he saw photojournalists taking his photo. (CDN PHOTO/ LITO TECSON)

The Philippine Drug Enforcement Agency in Central Visayas (PDEA-7) will coordinate with officials of the New Bilibid Prison in Muntinlupa City after one of its inmates was identified as the source of illegal drugs that was seized on Thursday from an alleged big-time drug trader in Cebu City.

PDEA-7 Director Yogi Filemon Ruiz said he has obtained the name of the inmate but refused to reveal it to the public, as it is pending investigation and validation.

“His first name is Filipino, but the family name is Chinese,” he told Cebu Daily News when asked to give a hint.

Ruiz said they will file the appropriate charges against the inmate once they gather enough evidence against him.

Antinarcotics operatives on Thursday arrested in an entrapment operation inside Ayala Center Cebu Jerome Sosmeña who reportedly supplied illegal drugs to members of the group who took over the operation of slain drug lord Jeffrey “Jaguar” Diaz.

Seized from his possession were an estimated P4 million worth of shabu, a weighing scale and several money transfer receipts.

Ruiz said charges for violating Republic Act 9165 or the Comprehensive Dangerous Drugs Act of 2002, particularly for selling illegal drugs, will be filed against Sosmeña before the Cebu City Prosecutor’s Office tomorrow. The offense is non-bailable.

Based on their investigation, Ruiz said Sosmeña got his supply of shabu from a source in Muntinlupa City.

“He is a big-time peddler. We found out that he recently supplied shabu to member of Jaguar’s group,” he said.

Jaguar was killed in a police operation in Las Piñas City last June 17.

Ruiz said Sosmeña’s name always cropped up in their investigations, and they decided to entrap him in a buy-bust operation last Thursday.

Sosmeña, 31, who is detained at the PDEA-7 stockade, denied the allegations leveled against him, saying he did not know Jaguar personally. The 31-year-old suspect, a resident of Barangay Luz in Cebu City, however, refused to elaborate.

Sosmeña, who once served as a youth leader of the St. Joseph Parish in Barangay Mabolo, was a former keyboardist of a local band before he worked as a job order employee of Cebu City for about a year in 2012.