Senior poses as ‘Death’, warns against drug use at cemetery 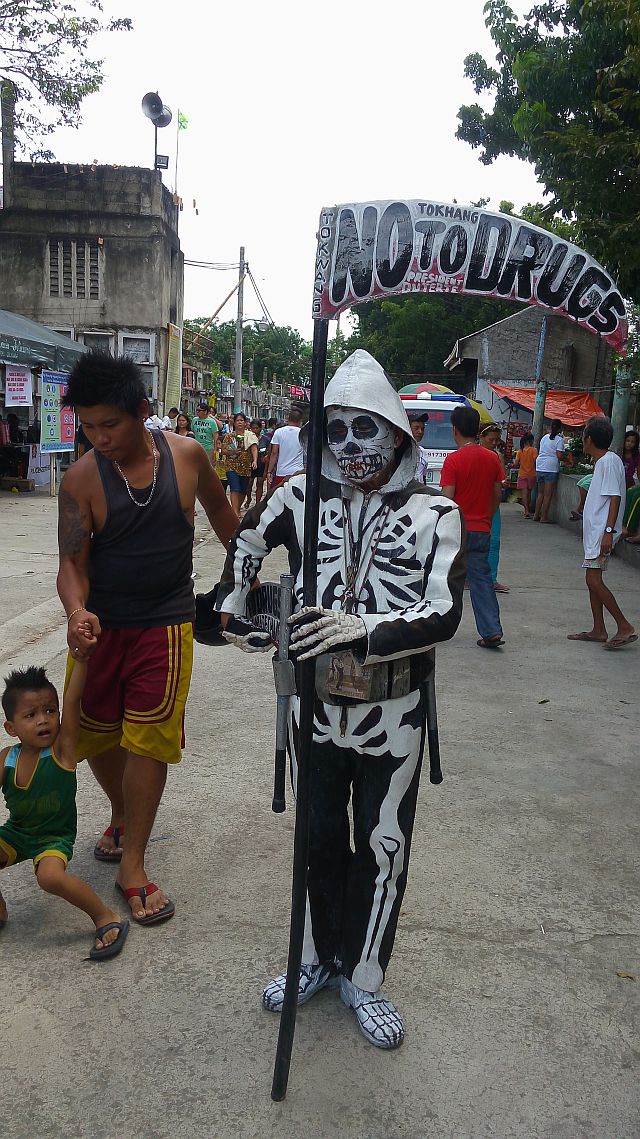 A senior who identified himself as ‘Mang Boy’ poses as the Grim Reaper bearing an anti-drug message (CDN PHOTO/NESTLE SEMILLA).

VISITORS paying their respects to their departed loved ones at Calamba Cemetery were surprised yesterday on seeing a senior citizen dressed in a skeleton suit and holding a scythe.

But rather than causing alarm, Mang Boy’s scythe bore the now familiar message “Say No to Drugs.”

Mang Boy, who requested anonymity, said he has been wearing costumes on special occasions like Halloween, Christmas and even Sinulog.

With the Duterte administration waging a high profile war against illegal drugs, Mang Boy said he decided to join the campaign by dressing up as the physical representation of Death to both scare and remind Cebu City residents against using drugs.

“Akong gituyo sa menteryo magtuyok aron makahibaw sila nga sa menteryo gyud sila puniton kung magsigeg drugas (I purposely chose doing this in a cemetery to show that they will be buried in the cemetery if they will use drugs),” Mang Boy said.

As a staunch believer in the war against drugs, Mang Boy said he knows how drugs damage the user’s body.

“I am already 68 years old. I have no vices ever since, I don’t use drugs nor even smoke. I can still jog everyday. I am still strong,” he said in Cebuano.

Mang Boy will wear the the skeleton costume until tomorrow, All Souls’ Day.

If he does receive a tip from anyone who will take a photo with him, he will use the money to buy candies for the kids during Christmas.