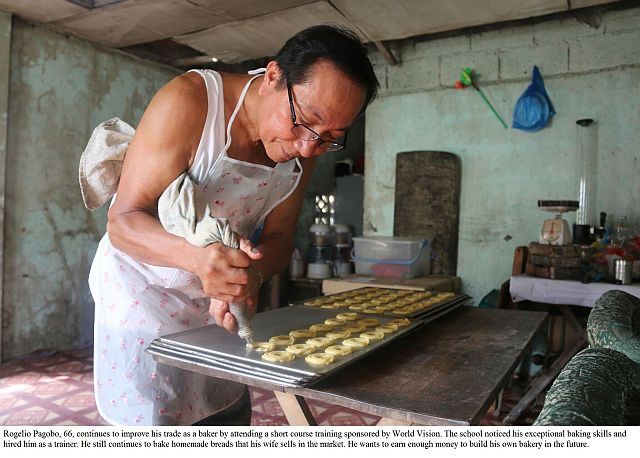 Rogelio Pagobo, a 66-year-old baker from Tacloban, has successfully rebuilt his own livelihood after the typhoon. He now helps his fellow Taclobanons by sharing his knowledge and skills in baking.

Life moves on for most Leyteños as they commemorate Supertyphoon Yolanda’s third anniversary today.

Three years after Yolanda, survivors slowly rise up and build back what they had lost.

Rogelio Pagobo, a 66-year-old baker from Tacloban, has successfully rebuilt his own livelihood after the typhoon. He now helps his fellow Taclobanons by sharing his knowledge and skills in baking.

“My hopes are for my family and students. I hope that I could leave something significant for my family in the future,” said Pagobo.

Pagobo became one of the 105 trainees who participated in a 10-day short course on cake-baking through World Vision in partnership with the Technical Education and Skills Development Authority (Tesda).

With his promising talent and potential, Pagobo also upgraded as a trainer for Mondejar Foundation College, the school that handles the Tesda training.
Pagobo has been training other bakers on bread making since June 2016. “For my students, I want them to show their interest and be focused on the training because this will absolutely help them,” he said.

Lenora Abdon, 42, picked up the pieces from Yolanda by starting small from her earnings through World Vision’s Cash-for-Work initiative during the rehabilitation phase. She now maintains an urban kitchen garden in her front yard and profits from her small sari-sari store with the help of her daughter.

With determination, Abdon regained her capacity to sustain her family’s needs and save some of her earnings for her emergency fund especially during typhoon season.

Pagobo and Abdon are just two of over 100,000 Leyteños who benefited from World Vision’s Typhoon Haiyan (locally known as Yolanda) Response livelihood programs.

Moving forward, World Vision joins the city government and the people of Tacloban in celebrating life, resilience and hope with this year’s anniversary theme — Paghinumdom ngan Pagpasalamat (Remembering and Thanksgiving).

The weeklong commemoration that started last Nov. 4 will culminate with the handover of children’s park and playground at the Tacloban Astrodome. The opening day of Children’s Park and Playground serves as the centerpiece of World Vision’s Hope for Tacloban’s Children Project.