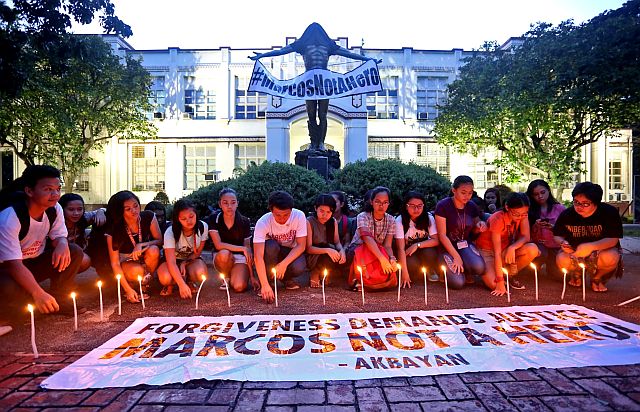 Students of the University of the Philippines College Cebu stage a protest immediately after hearing about the Supreme Court decision to allow the burial of former president Ferdinand Marcos at the Libingan ng mga Bayani (LNMB), Tuesday (CDN PHOTO/LITO TECSON).

The hammer has fallen on the decades-old issue of whether or not Philippine dictator Ferdinand Marcos can be buried a hero at the Libingan ng mga Bayani (LNMB).

In a dramatic ruling on Tuesday, the Supreme Court, voting 9-5, threw out a petition filed by human rights groups and victims of martial law, allowing the burial of the former president at the heroes’ cemetery in Taguig City, Metro Manila.

But while the decision by the high tribunal as the final arbiter should have ended the matter, the Marcos victory was largely met with anger and disappointment as many conceded not defeat, but that the ruling has all but opened old wounds.

In Cebu, there are those ready to contest the ruling, if only to put history in its proper perspective, they said.

Retired executive judge Meinrado Paredes expressed grave disappointment over the decision, saying that the justices who voted for it were too legalistic without looking at the implication of their decision to the country’s history.

“It is a sad day for us, victims of human rights violations. It is a shame. In fact, a judge texted me and said that he is embarrassed to be part of the judiciary,” Paredes told radio dyLA.

“It was not disproved that Marcos was a dictator who violated human rights and committed plunder. He should have no place in the Libingan ng mga Bayani,” said Paredes, lamenting that the decision totally ignored the country’s history.

Paredes expressed fears that the ruling might be taken to mean by young generation of Filipinos that the dictator was indeed a hero.

Millennials should know that during the dark days of martial law, there were massive violations of human rights, murder, torture, kidnapping and forced disappearances, Paredes said.

“But then the struggle does not end after the Supreme Court decided that way,” he said.

For Cebu City Councilor Jose Daluz III, who grew up hearing his mother, Cebu opposition icon Nenita “Inday Nita” Cortes-Daluz’s powerful voice on her popular radio commentaries against the dictatorship, the decision could trigger mass protests and will start to divide the country once more.

“I don’t think the people who fought in the EDSA revolution and who are still very much alive today will stand idly and let this go. I’m afraid for our country because they are practically rewriting history which has already made a judgment through the 1986 People Power,” Daluz said.

“There can be no reconciliation if there is no justice. The SC decision, instead of healing the nation’s wounds, only deepened the unhealed wounds of victims of the martial law,” he said.

“I really did not expect it because I thought that majority of our Supreme Court justices were forthright. As it turns out, very few are and I am so disappointed,” an angry Barcenas added in Cebuano.

Barcenas noted that the justices who favored Marcos’ burial in the LNMB were the same justices who voted in favor of former senator Juan Ponce Enrile’s bail for his plunder case. Enrile, Marcos’ defense minister, was the administrator of Martial Law.

In the decision penned by Justice Peralta, the high court said there was no grave abuse of discretion on the part of President Rodrigo Duterte when he ordered that the remains of Marcos be buried at LNMB because it was done in the exercise of his mandate under the 1987 Constitution.

“[There is] no clear constitutional or legal basis to hold that there was grave abuse of discretion amounting to lack or excess of jurisdiction which would justify the Court to interpose its authority to check and override an act entrusted to the judgment of another branch,” the high court said.

“At bar, President Duterte, through the public respondents acted within the bounds of law and jurisprudence. Notwithstanding the call of human rights advocates, the Court must uphold what is legal and just and that is not to deny Marcos his rightful place at the LNMB,” the high court said.

As the incumbent, Duterte, the high court said, is not bound by the 1992 agreement between the Marcos family and former president Fidel Ramos which provides that the Marcos remains will be interred in Batac, Ilocos Norte.

While there are allegations of human rights violations committed by the former dictator, the high court said Marcos is still not disqualified to be buried at the LNMB because he has not been convicted of a crime involving moral turpitude.

“(T)he various cases cited by petitioners, which were decided with finality by courts here and abroad, have no bearing in this case since they were merely civil in nature; hence, (they) cannot and do not establish moral turpitude,” the high court said.

The petitioners argued that the planned burial of the late dictator is “illegal and contrary to law, public policy, morals and justice” and that allowing the burial would violate Republic Act No. 289 (which provides that the purpose of the construction of a national pantheon is to perpetuate the memory of all the Presidents of the Philippines, national heroes and patriots for the inspiration and emulation of this generation and of generations still unborn) and RA 10368 (Human Rights Victims Reparation and Recognition Act).

Vice President Ma. Leonor “Leni” Robredo expressed deep sadness and disappointment over the SC decision, calling the refusal of the Marcos family to take responsibility for the martial law abuses an “insult” to the Filipinos.

In a statement, the Vice President stressed that while the issue might pass “the bar of legal technicality”, granting the dictator a burial fit for heroes will “never be consistent with morality and the spirit of the Filipino People Power Revolution.”

Albay Rep. Edcel Lagman, one of the petitioners against the move to give Marcos a hero’s burial, said he was puzzled why the Supreme Court would grant such privilege to a “plunderer.”

“This is a horrible day for democracy,” was how Senator Francis “Kiko” Pangilinan described the high court’s ruling.

“Thanks to the Supreme Court, the Philippines will be a laughing stock of the world. We kicked out a reviled dictator and now we are honoring him by burying him in our national heroes’ cemetery,” Pangilinan said.

“If the Supreme Court thinks it has the final say on the matter, then they are terribly mistaken. Burying Marcos in the Libingan has created a huge divide that will haunt the nation for days and years to come,” he said.

Former Rep. Antonio Cuenco of Cebu City’s south district was aghast when a friend called him up to relay the SC’s decision that allowed the burial of Marcos at the Libingan ng mga Bayani.

While he respected the decision of the nine justices, Cuenco said the ruling should not be left as it is.

“There should be a public uproar. I am willing to lead protest rallies against this ruling to express dissent,” said Cuenco, who was detained in three different occasions for joining public assemblies against Marcos.

At City Hall, Cebu City Mayor Tomas Osmeña was not at all happy with the SC decision.

“This is an insult to the Filipino people. Is this the way to commemorate a dictatorship?” he said in a text message to CDN.

His wife, Cebu City Councilor Margarita Osmeña, said that although she was not surprised by the SC vote, the decision took long.

“I’m not shocked. But I’m not happy. This is personal. My husband’s family was directly affected by the Marcoses. They were put in exile for how many years. And my brother-in-law (former Senator Serge Osmeña) was put to jail,” she said.

Lawyer Aaron Pedrosa, secretary general of Sanlakas, called the decision an “affront to the very Constitution, which was borne out of the people’s struggles against the Marcos’ dictatorship”. “This rewrites the Constitution as if it obscures the widespread human rights violation and the plunder of the Marcoses during their rule,” he said. “It sends a chilling message that despite all of these, he is, after all, a hero. Sanlakas is in indignation,” Pedrosa said in a statement. “The youth will resist a future where a dictator becomes a hero while his victims’ memories are dishonored,” said Justine Balane of Akbayan Youth in an indignation rally held at the University of the Philippines College Cebu.

Former senator Ferdinand “Bongbong” Marcos Jr. thanked the Supreme Court for allowing his father’s burial at the LNMB and President Rodrigo Duterte for his “unwavering commitment” on this issue.

“Once again, the Supreme Court has taken a magnanimous act to uphold the rule of law,” Marcos said.

“We also would like to extend our sincerest gratitude to President Rodrigo Duterte as his unwavering commitment to this issue sustained us these past several months. Our family will forever be thankful for his kind gesture,” he said.

The former senator expressed hope that the SC ruling would lead the nation towards healing and “move the country forward to give every Filipino a better life.”

“Justice has been served. The rule of law has prevailed. It’s time to move on,” Garcia told CDN.