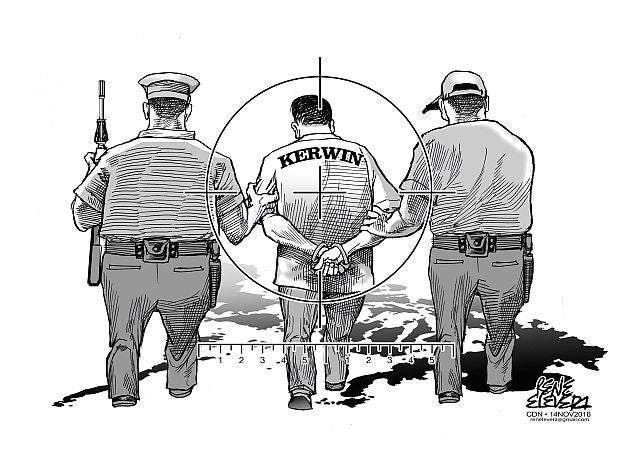 With President Rodrigo Duterte publicly assuring the protection of suspected drug lord Kerwin Espinosa, we hope that everyone assigned to securing the late mayor’s son will make sure he stays alive at least long enough for him to make a substantial testimony that will identify his suppliers, his benefactors and those who benefited from his illegal drug operation.

Despite the absence of solid evidence that can stand up in court and prove beyond reasonable doubt that last Saturday’s death of Albuera Mayor Rolando Espinosa Sr. was a summary execution, the details of the operation suggest strongly that it was.

This was said as much by Sen. Richard Gordon, who chairs the Senate justice committee even if the hearings have yet to be concluded. And with President Duterte offering blanket protection to the police officers directly involved with the operation, what’s to stop similar operations from happening in the very near future?

But first things first. Kerwin’s safety is just as important, not a few would argue to be more so, than the testimony that he is bound to give when he arrives in the country later in the year or even next year.

There is this lingering suspicion that Kerwin may also meet his end upon his arrival in the country, but President Duterte’s assurance dispels that possibility unless the police officers in charge of Kerwin’s security are in cahoots with the drug lords and those persons of influence who want to silence him permanently.

And last week’s Senate justice committee hearings offered some pretty explosive revelations including the allegations that Ormoc City Mayor Richard Gomez had been included in the late mayor’s books as allegedly being involved or at least a beneficiary of the Espinosa syndicate’s illegal drug trade.

It’s not exactly damage control or maybe it is, but we really don’t know what the Senate hopes to achieve with their investigation when it is merely in aid of legislation/reelection, and there are already enough laws governing rules of engagement not only in war but in police operations.

The sheer lack of transparency and the absence of security camera footage that would have determined whether procedures were followed during the operation are enough red flags that would all but confirm that at the very least something irregular occurred during the Leyte jail raid last Nov. 5.

Now we have word that the Ombudsman plans to investigate the Nov. 5 jail raid incident, and the word spread on social media sites by Duterte loyalists called for the ouster of Ombudsman Conchita Carpio-Morales whom they accuse of being biased in favor of the past administration.

For now, though the priority is to get Kerwin safe and at home and for the police to buckle down to some real work and build an airtight case that would result in convictions and the toppling down of the illegal drug network operating in the country.

Read Next
Environmental awareness and action