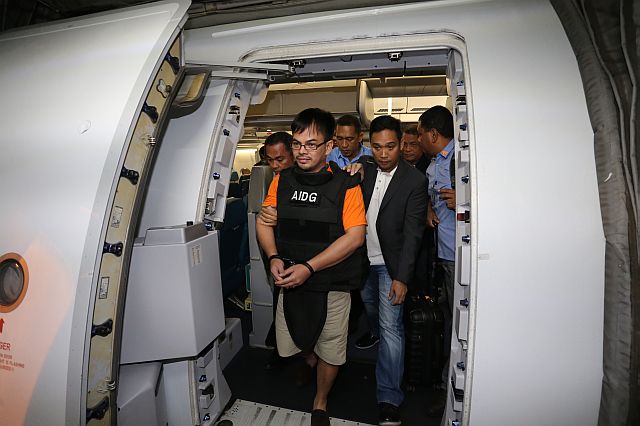 Suspected drug lord Rolan “Kerwin” Espinosa arrived at the airport last Nov. 18 from Abu Dhabi where he was arrested. He is currently detained at Camp Crame (PNP-PIO Photo).

WITH the family of the slain mayor Rolando Espinosa Sr. deciding to have the mayor’s burial in Albuera town in Leyte province instead of Cebu City, a family member also expressed her desire for the mayor’s son, Rolan “Kerwin” Espinosa, a top drug personality, to stay at Camp Crame instead of visiting his father’s wake for security purposes.

“I would rather not let him see his dad than put his life at risk,” Emma Espinsosa, Kerwin’s aunt, told Cebu Daily News over the phone yesterday.

Kerwin, who was tagged as the biggest drug lord in Eastern Visayas, arrived last Friday from Abu Dhabi, United Arab Emirates, where he was arrested last Oct. 17. Kerwin has currently been detained at Camp Crame since his arrival.

The family also decided to bury the late Mayor Espinosa in Albuera.

Emma, wife of the older brother of the late mayor, said that they also decided not to bring Mayor Espinosa’s body to Cebu City where their family came from.

“They have a mausoleum (in Albuera) and he (Mayor Espinosa) had already relocated here with his family,” she explained.

Emma said that they are waiting for the slain mayor’s siblings to arrive from the United States by the end of the month.

Among Espinosa’s six siblings, only Emma’s husband Ramon and the latter’s younger sister Janet have arrived in Leyte.

The date of internment has yet to be finalized.

Mayor Espinosa and another inmate Raul Yap were killed in what the Criminal Investigation and Detection Group in Eastern Visayas (CIDG-8) said was a shootout at the sub-provincial jail in Baybay City, Leyte past 4 a.m. on Nov. 5.

A total of 24 policemen took part in the dawn operation to serve a search warrant that led to the killing of Espinosa.

The manner by which Espinosa was killed was tainted by allegations of a rubout.

Both the Philippine National Police and the Senate are conducting separate investigations on Espinosa’s death.

Espinosa had earlier issued an affidavit naming at least 200 persons — politicians, policemen and even media practitioners — who allegedly received payola from his son Kerwin.

Kerwin, a native of Barangay Hipodromo in Cebu City, arrived at the PNP headquarters in Camp Crame, Quezon City early morning last Friday, barely a month after his arrest in Abu Dhabi.

Read Next
German national nabbed in hospital for human trafficking