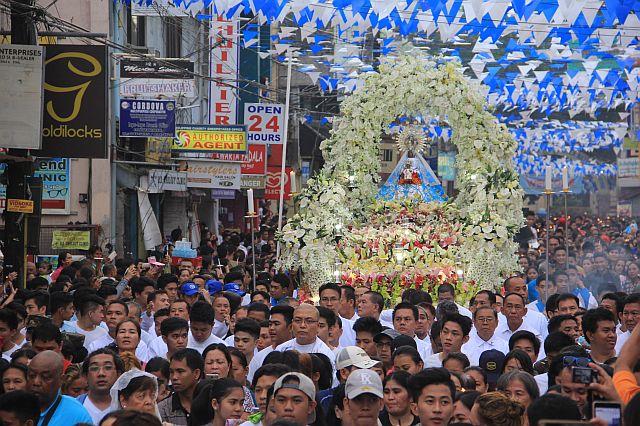 Thousands of devotees join the procession in honor of the Our Lady of the Rule (CDN PHOTO/NORMAN MENDOZA).

Around ten thousand devotees of the Our Lady of the Rule joined the procession in honor of Lapu-Lapu City’s patron saint yesterday afternoon.

The procession followed after the 3 p.m. Mass officiated by Fr. Bogie Cabrera at the Birhen de la Regla Parish church.

Fr. Cabrera’s homily was centered on unity of the people for better harmonious relationship working towards helping the less fortunate and those poor in spirit.

The procession route was shortened this year but it took more than an hour and a half for the devotees to return to the church after the around one-kilometer walk.

Security was tight with police personnel visible everywhere taking control of the crowd to avoid any untoward incident.

Traffic enforcers guided motorists as some streets were closed for the procession. They also guided devotees coming from other places to the designated parking spaces.

Augmentation personnel from the Regional Public Safety Batallion (RPSB) will help secure the areas, particularly the Birhen de la Regla church, where bulk of people is expected to flock on the eve of fiesta today.

Today at around 3 a.m., another procession was held for Christ the King.

The Lapu-Lapu City government has declared no classes in all public schools and no work in all government offices on Monday, November 21, so that students and city hall employees can take part in the celebration of the 281st feast of the Virgin of the Rule.

Airport bound passengers are advised to leave early from their houses as traffic congestions are expected to build up at the old Mandaue-Mactan bridge and the Marcelo Fernan Bridge today.