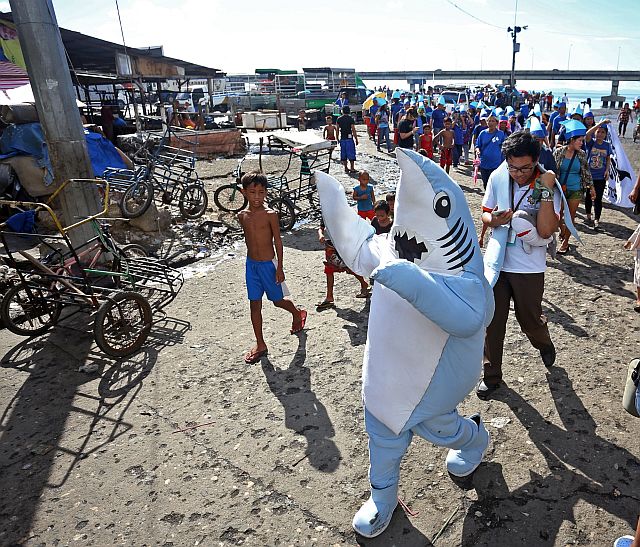 The Shark Parade by environmental groups that sought to raise awareness among Pasil market vendors of the government ban in the trade on shark meat. (CDN PHOTO/LITO TECSON)

More hands are needed on deck to enforce the Cebu City ban on shark meat, the head of City Hall’s Department of Veterinary Medicine and Fisheries (DVMF) said yesterday.

A “Shark Parade” was held by some pro-shark advocates and environmental nongovernment organizations from the Pasil Fish Market going to the mayor’s office.

“We wrote the mayor asking if the DVMF fishery division can be allowed to implement the EO in terms of confiscation because we also have our personnel every day assigned in the different markets,” Utlang said.

Utlang said the DVMF has 10 personnel from their public health division and another seven from their fisheries division who inspect the city’s markets every day and can help implement the order.

“Our fish inspectors in the market are always doing inspections. So we want to help,” she said.

Included in the DVMF’s mandate is to go after and confiscate double-dead or substandard meat that are being circulated within the city.

They are also tasked to make sure that meats are properly documented and stored and transported in ideal circumstances to help ensure the health of those who will buy the meats that end up in the city’s markets.

Osmeña’s EO for the protection of sharks, rays and chimera species made the island of Cebu as the first island province to completely prohibit the catching, selling, possessing and trading of all three species as well as their derivatives.

The Cebu provincial government and Lapu-Lapu City government already have similar ordinances and laws on the ban on shark meat.

The Cebu City Market Authority has been given 90 days to draft the implementing rules and regulations for the mayor’s order.

Read Next
Holiday in Lapu City for today’s fiesta