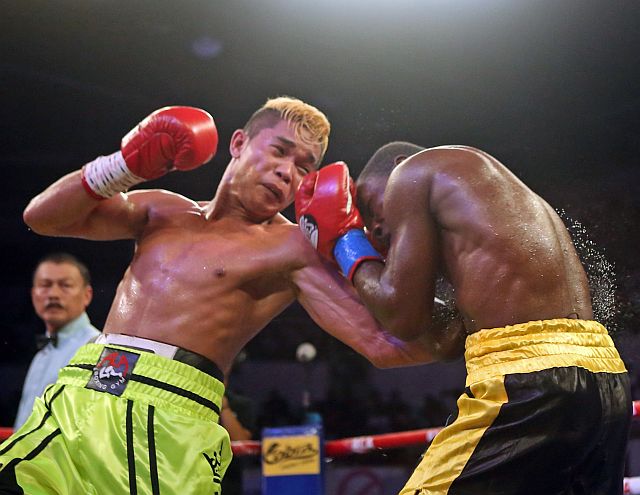 “Prince” Albert Pagara of ALA Gym goes for the body against Raymond Commey in the undercard of the Pinoy Pride 39: Road to Redemption last Saturday night at Cebu Coliseum.
(CDN PHOTO/LITO TECSON)

“PRINCE” Albert Pagara marked his return from his first career-loss with a unanimous decision win over Ghana’s Raymond Commey in the undercard of Pinoy Pride 39: Road to Redemption at the Cebu Coliseum last Saturday night.

Though it was a triumphant return, Michael P. Aldeguer, the CEO of ALA Promotions International, was unimpressed with Pagara’s performance.

“I was not impressed but for a person who got knocked out in his previous fight, it really takes time to recuperate and recover from it. I believe that Albert will be back on his feet and redeem himself,” Aldeguer said.

It was Pagara’s first fight since suffering a knockout loss to Mexican Cesar Juarez last July in the US.

All three judges scored the fight at 99-91 for Pagara (27W-1L-0D-18KOs).
There were times that Pagara rocked Commey (16W-4L-0D,9KOs) with solid combinations but the Ghanian fighter answered with his own hits.

Some fans booed Pagara after the decision was announced, while Commey received some applause.

“He will be back for sure, let’s give him some time,” said Aldeguer.

Jason, 28, recorded his 25th knockout victory to go with two losses, while Alfaro absorbed his 11th loss with 28 wins (24KOs) and one draw.

Pagara unleased a series of hooks to the body that sent Alfaro crashing to the canvas, grimacing in pain.

In other undercard fights, Jeo “Santino” Santisima of Masbate pulled off a fifth-round technical knockout (TKO) victory over Rex Wao of Baguio City, while WBO Inter-continental bantamweight champion Jimmy “Popeye” Paypa knocked out Jerry Nardo with a liver punch in the 43-second mark of the third round.

ALA Boxing Gym flyweight prospect, Kevin Jake Cataraja knocked out fellow Cebuano John Kenan Villaflor in the first round; Melvin “Gringo” Jerusalem won by unanimous decision over Fabio Marfa; while Virgel Vitor knocked out Jonathan Francisco in the fourth round.