Fire site will be reblocked with wider roads 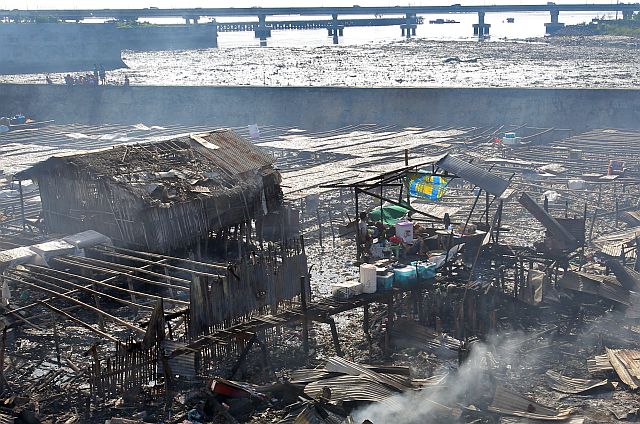 Some of the fire victims return to their burned houses in Barangay Duljo Fatima (CDN PHOTO/JUNJIE MENDOZA).

THE Cebu City government is looking at constructing wider roads in the six sitios in Barangay Duljo Fatima that were struck by a fire area shortly before midnight on Thursday.

The narrow roads leading to and inside the affected area were largely blamed for the inability of the firefighters to put out the blaze until nearly seven hours later.

At least eight new roads with a minimum width of 6.5 meters will be established in the area, according to Division for the Welfare of the Urban Poor (DWUP) head Genevieve Alcoseba.

Smaller interior roads will also be developed to make sure that in the event of future disasters or emergencies there, responders can easily penetrate the area.

“We discussed this with the mayor. We really need new roads there. The city will have to do clearing of the fire site and at the same time establish the roads. Puslan gitugotan sa panahon (Since this already happened), we should just establish the roads,” she told reporters yesterday.

She said this incident had been the biggest fire to hit Cebu City this year.

Based on DWUP records, the affected area is a public lot, which means that the city can be allowed to make changes there.
The affected families will be allowed to rebuild their homes but are advised to wait for the city’s subdivision of the lots to know their assigned area.

He said that while some of the house owners already have land titles, which they acquired through residential free patent, portions of the site remain public lands.

With the profiling and validation of the fire victims still being conducted by the Department of Social Welfare and Services (DSWS), Alcoseba said they still need to wait for the official numbers in order to reblock the area.

Thus, even after the legitimate house owners are given their assigned home lots, they will be advised not to rebuild yet.

The DSWS reported that 531 houses were destroyed by the fire, which also displaced 602 families or around 3,000 individuals.

But DSWS head Lea Japson said the profiling and validation of the fire victims were still going on, which means that the numbers may still change.

Duljo Fatima Barangay Captain Elmer Abella said the village officials have agreed to the city’s plan to reblock the area.
“We will be happy if the area is reblocked. That has been the plan since (the time of) former mayor Mike Rama so that in case there is another fire there, it won’t be difficult anymore,” he said in Cebuano.

The fire victims are currently staying in designated evacuation areas at the Duljo Fatima barangay sports complex and the nearby San Nicolas Elementary School.

Although Cebu City Mayor Tomas Osmeña has ordered that classes in schools should not be disrupted in housing fire victims, Cebu City Disaster Risk Reduction and Management Office (CCDRRMO) head Nagiel Bañacia said they decided to use the elementary school since classes have been suspended there also.

“Nobody showed up for their classes today (Friday) because 90 to 95 percent of the students occupying the 14 classrooms there were also victims of the fire. Even some teachers (were also fire victims). That’s why there were no classes,” he said.

For his part, Osmeña said he will push through with his plan to double the city’s financial assistance to fire victims. From P10,000 per family, it will be raised to P20,000, he said.

He said a draft Executive Order covering the increase is now being finalized, and the Duljo Fatima fire victims will be included as beneficiaries of the higher cash aid.