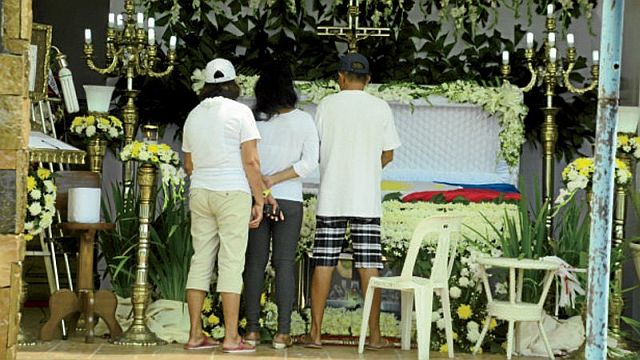 MAYOR’S WAKE. Residents of Albuera town in Leyte province pay their respects in this Nov. 14, 2016 photo to their mayor, Rolando
Espinosa Sr., who was killed under doubtful circumstances by police officers inside the Baybay jail. (INQUIRER FILE PHOTO)

Albuera, Leyte, Mayor Rolando Espinosa Jr. will be laid to rest today, a month after he was shot dead inside his cell at the sub-provincial jail in Baybay City, Leyte.

His son Rolando “Kerwin” Espinosa Jr. will not attend the funeral because of threats on his life.

“He (Kerwin) is sad, but he understands the difficult situation he is in right now. It is too risky for him to attend the funeral,” said family lawyer Leilani Villarino.

During his testimony at the Senate inquiry that looked into his father’s killing, Kerwin accused Sen. Leila de Lima of receiving P8 million from him to help her in her senatorial bid.

He also dragged several police officials as among those who allegedly received money from him.

Among them was Supt. Marvin Marcos of the Criminal Investigation and Detection Group in Eastern Visayas (CIDG-8) whose team led the raid on the cells of the elder Espinosa and another inmate, Raul Yap. Espinosa and Yap were killed after they allegedly engaged 24-man raiding team in a shootout during the dawn operation based on a search warrant on the jail facility.

Espinosa’s death was tainted with allegations of a rubout. Senators Richard Gordon and Panfilo Lacson said they believe the mayor was killed to silence him.

Ramon Espinosa, the eldest of seven siblings, said the funeral will be simple, as agreed by the family members.

Ramon said they had to wait for their mother and four siblings to arrive from the United States, which was why the burial was delayed.

“There won’t be any gimmicks. It’s going to be the same ordinary funeral that you see,” he said in a phone interview.

He said they decided to let Kerwin stay inside the detention facility in Camp Crame for security reasons.

Kerwin’s five siblings will bring their father to his final resting place at a Catholic cemetery this afternoon.

At 1 p.m., the body of the mayor will be brought to St. James Parish from their home in Barangay Benolho for a Requiem Mass.

After the Mass, a funeral procession to the cemetery, which is about a kilometer away from the church, will follow.

Senior Supt. Franco Simborio, Leyte provincial director, said policemen will be deployed to the Espinosa residence as well as along the routes going to the church and the cemetery to ensure no untoward incidents would happen.

“On top of the augmented forces during the burial, I have deployed 20 policemen to the family until such time that the threat against them subsides,” the police official said.

Villarino said that while the family would continue to seek for justice, they hoped that the community would join them in bringing the mayor to his final resting place.

“After all, he was still the local chief executive on the day that he was shot,” Villarino said.

There was supposed to be necrological services offered by the municipal government, but it was canceled by the mother of Espinosa for health reasons.