Apas fire victims to be relocated to Kalunasan 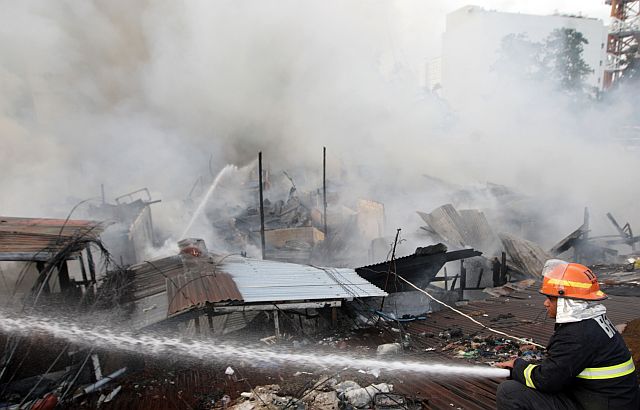 RESIDENTS of Barangay Apas whose houses were razed to the ground last Monday may not be able to rebuild their homes in the same area where their houses stood.

Its residents, however, are under the territorial jurisdiction of the Cebu City government.

During a meeting yesterday, Cebu City Mayor Tomas Osmeña and Cebu Governor Hilario Davide III discussed how to help the fire victims, many of them belonging to a community of blind people, and eventually agreed that the province will be responsible for the relocation of 87 households, while the rest of the fire victims will be placed under the city’s relocation plan.

What is common though is the location of the relocation sites which would be in Barangay Kalunasan, a mountain village where the most common mode of transportation is the motorcycle-for-hire commonly known as habal-habal.

Traversing the steep and winding roads in Kalunasan is no easy feat for both the habal-habal driver and his passenger, raising concerns about the welfare of the blind should they be relocated there.

Davide said he is still to review everything that was agreed upon during the meeting, adding that he is aware of the plight of the fire victims.

Asked about the possibility of the blind fire victims rebuilding their homes on the same site, Davide said nothing was set in stone yet but that their situation is taken into consideration.

Residents were worried over the news that they might not be able to return to their respective areas or they might only be able to stay until March next year and would have to find a new place.

Mary Ann Lodovice, 28, said the Department of Social Welfare and Services of the city government conducted a consultative meeting yesterday and briefed them of the situation.

“Ingon sila taman rami Marso pero di pa daw sure. Dili man sad siguro na madali-dali kay daghan pud nakapuyo nga mga blind (They told us that we can only stay until March next year, but nothing is certain. I don’t think it will be that easy to relocate us considering that there are blind people who reside in the area),” she said.

She said that they were told that they would be relocated to Barangay Kalunasan, but most of them were not keen on the idea of relocating.

She said the Cebu City government should let them return to the place where their houses stood because it’s nearer to their workplace and livelihood.

“Lisod pud nga manghawa lang mi dayon kay dool ra kaayo among panginabuhian diri (It would very difficult to transfer since our livelihood is just within the area),” she said.
She said that she washes clothes for a living while her husband Reynaldo works as a security guard in a business district in Apas.

Judith Regoña, 41, said she has been living at Sitio CRCI for almost a decade now and they are used to living in the said place.

She said it would be more convenient for her husband if they lived in Apas rather than in Kalunasan.

However, she welcomed the idea of relocating as long as they will be provided with housing materials and the relocation site has water and electricity.

Read Next
NO JAIL TIME FOR ESPINOSA KILLERS