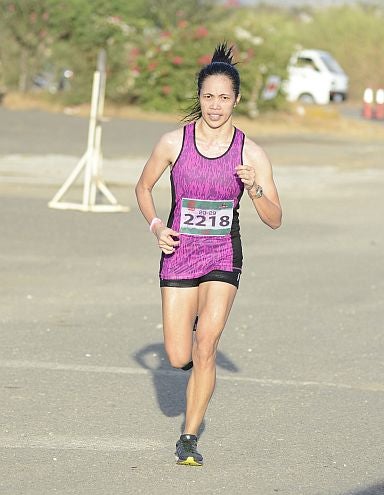 RUFFA Sorongon bounced back from an unsuccessful campaign in the recent 40th National Milo Marathon Finals after she dominated the first-ever CENTCOM RUN that was held at the Armed Forces of the Philippines (AFP) Central Command, better known as Camp Lapu-Lapu in Cebu City last Friday night.

Sorongon qualified to the National Milo Marathon Finals that was held in Iloilo City last Dec. 4 after she ruled the women’s 21k division of Milo Marathon-Cebu leg.

However, the runner from Sultan Kudarat had a forgettable stint in Iloilo after she collapsed in the final stretches of the 42k run. She was rushed to a hospital where she later recovered.

Yesterday, Sorongon was back in her old solid form, pocketing his 21st win this year with a time of 44 minutes and 45 seconds. She beat Lovely Andrin, who finished second at 45:38.

Continuing to dominate local races was Kenyan Eric Chipsiror, who topped the men’s 10k race for his 12th win this year. He crossed the finish line in 33:42 to beat compatriot Joseph Mururi, who timed 34:43. Michael Largo ranked third with a time of 38:48.

In the 5k race, Cherry Andrin and Arnel Florentino were crowned the women and men’s champions by clocking in 21:09 and 17:11, respectively.

Michelle Beboso and John Cliff Debolusan went home with the 3k women and men’s titles at 13:48 and 10:03, respectively.