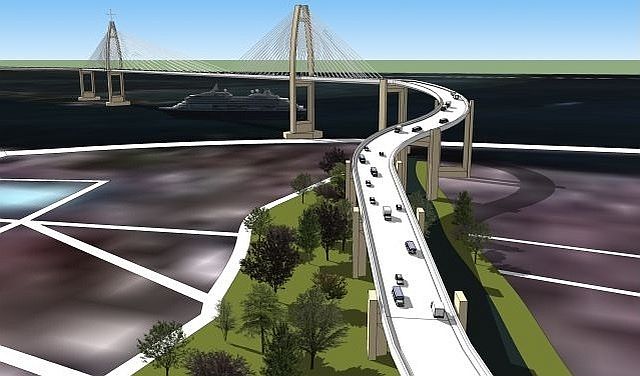 An architect’s perspective of the proposed third bridge between Cebu and Mactan Island.

Residents near the mouth of Guadalupe River in Cebu City can now heave a sigh of relief as their houses won’t have to be cleared anymore as the planned additional access road near the mouth of the river will not push through.

According to City Hall’s Division for the Welfare of Urban Poor (DWUP) head Genevieve Alcoseba, it was agreed by the city and representatives of the project’s private proponent, the Metro Pacific Tollways Development Corp.
(MPTDC), that they have to completely scrap the Guadalupe River access into the bridge.

“It will not push through anymore. This was also Mayor Tom’s (Osmeña) concern that constructing the Guadalupe River access will displace families there,” Alcoseba told reporters yesterday.

At least 1,000 families in at least four barangays along the Guadalupe River were initially planned to be relocated to give way for the access road.
With this development, only the originally planned access in the Cebu South Coastal Road (CSCR) in the South Road Properties (SRP) will connect to the Cebu-Cordova toll bridge.

The plan to have an additional access near the mouth of the Guadalupe River was introduced in the course of detailed negotiations between the city and the MPTDC during the administration of former mayor Michael Rama.

He would have wanted the second access to connect all the way to V. Rama Ave.
Earlier this year, the MPTDC proponents proposed to the Cebu City Council to initially start working on just one access road into the bridge – the one in the CSCR. They said they can just work on the Guadalupe Access later on considering that it would entail too much work in acquiring more than a hundred lots for the road right of way (RROW).

Under the joint venture agreement between the city and MPTDC, it is the city’s responsibility to acquire the RROW needed for the project.

But with this latest development, the Guadalupe access will already be scrapped from the plan.

Alcoseba said though that other aspects of the supposed second access like soil boring and the parcellary survey for the four barangays will still continue. But she assured that this will not displace the residents in the area.

Alcoseba said they have started doing information dissemination to inform the residents about the “good news.”

The barangay councils of Pasil, Ermita and Pahina Central have earlier passed resolutions opposing the Cebu-Cordova bridge project, saying that aside from displacing some of their residents, it is also expected to create noise disturbance from vehicles traversing the bridge.

In a separate interview, MPTDC legal consultant Aristotle Batuhan told reporters that they are still doing presentations with different agencies especially those with new officials after the May elections including the Toll Regulatory Board and the Philippine Reclamation Authority.

“We are hopeful we get the permits or approvals soon. If not within the year, by January or February next year, at the latest,” he said.

Batuhan added that the project is still on target with their expected start of construction on the second quarter of 2017. It is expected to be finished by 2020.