EMB says both city, provincial jails may have caused stench 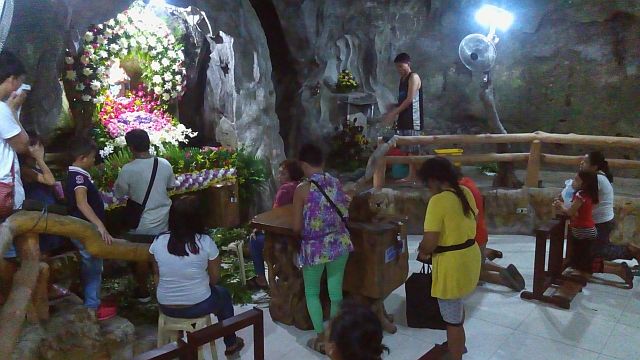 A HARDY LOT. Despite the stench emanating from the nearby Kalunasan Creek, devotees of the Our Lady of Guadalupe attend the Mass in time for the fiesta celebration. (CDN PHOTO/TONEE DESPOJO)

Both the Cebu City jail and the Cebu Provincial Detention and Rehabilitation Center (CPDRC) may be responsible for causing the stench at the Kalunasan Creek, the Environmental Management Bureau in Central Visayas (EMB-7) said yesterday.

“Based (on) our visual observations on their existing water waste, dili maayo (it’s not good). They (CPDRC and city jail) are not properly maintaining their water waste facility,” EMB-7 Director William Cuñado said.

Cuñado said his team obtained water samples at the waste facility of the jails for laboratory examinations a day after they also took samples from the Kalunasan Creek. The results will be available in five days.

But based on their observations alone, Cuñado admitted that there is a big chance that CPDRC and city jail violated environmental laws.

“It’s not working well ilahang treatment. Wala gi-operate properly, dako kaayo og chance nga dili maayo ang discharge nila coming from water waste (Their treatment facility, it’s not working well. They are not operating their facility properly. There is a big chance that they are not discharging properly their wastes),” Cuñado said.

Cuñado said they will conduct a technical conference with officials of both jails after securing the lab results.

The officials of both jails have yet to respond to Cuñado’s disclosure as of this writing.

But both Cebu City jail Warden Jessie Calumpang and acting CPDRC Warden Dr. Gil Macato have vehemently denied that their jails were responsible for causing the stench in Kalunasan Creek.

The stench had caused the faithful to turn away from attending Mass at the Langub Shrine, which houses a replica of the image of Our Lady of Guadalupe inside a cave, due to the foul odor emanating from the creek.

Cebu Gov. Hilario Davide III called on both the Bureau of Jail Management and Penology (BJMP) and the Provincial Engineers Office to investigate the stench coming from both jails.