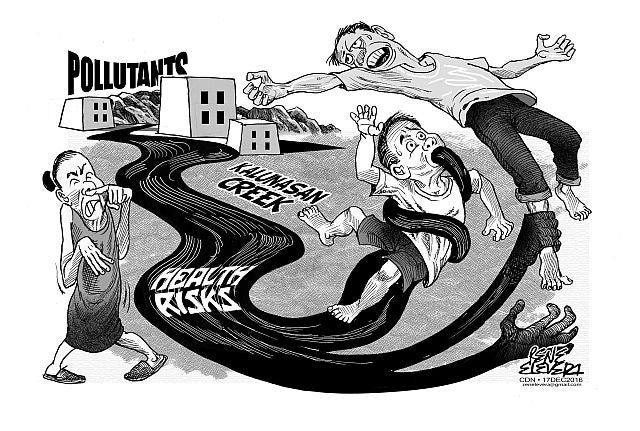 It was pathetic seeing the officials of both the Cebu City Jail and the Cebu Provincial Detention and Rehabilitation Center (CPDRC) blaming each other for the stench emanating from the Kalunasan Creek which, if left to worsen, will become a health hazard to residents in the low-lying areas of Barangay Kalunasan.

An inspection by the Environmental Management Bureau (EMB) confirmed that the waste water facilities of both the Cebu City Jail and the CPDRC were not functioning and were poorly maintained.

It isn’t hard to see why, considering that both jails are well over capacity in terms of their prison population. It was only a matter of time before the waste facilities were bound to break down and with it the conditions inside as well.

To put it bluntly, even animals wouldn’t last long if they were confined either at the city jail or the CPDRC. We dare say that the Cebu City Zoo at least has some foliage and room for the animals to breathe in compared to the congested, foul-smelling constricted space available at either jails.

That said, why should residents of the low-lying areas be made to suffer more from the neglect of both the Cebu City and provincial governments who are mandated and have the resources to stop the pollution at the Kalunasan Creek?

The results of the water samples have yet to come in, yet the initial findings only serve to firm up suspicions by the affected residents that the two jails were responsible for the stench emanating from the creek.

The two jails are located at an elevated terrain, and owing to the fact that the waste facilities aren’t functioning, it’s not hard to put two and two together and conclude that the jails are responsible for the stench.

There may still be some other factors that could have caused the pollution at the creek, and if there are, we hope the EMB can uncover it so whatever is causing it can be stopped for good.

Even if by some remote possibility that the test results show that the jails aren’t responsible for the stench at the Kalunasan Creek, it is high time that both the city government and the province act on improving the conditions inside the jails by fixing the waste facilities there.

It’s bad enough that the inmates were causing trouble even when detained by dealing and profiting from the sale of illegal drugs. Would it be too much for the city and the province to find something in their collective budget to spend for fixing or building new waste facilities there?

If not, can they not do something to immediately address the problem? The residents of the low-lying areas in Barangay Kalunasan should be spared from the stench of Kalunasan Creek lest they become sick because of it.