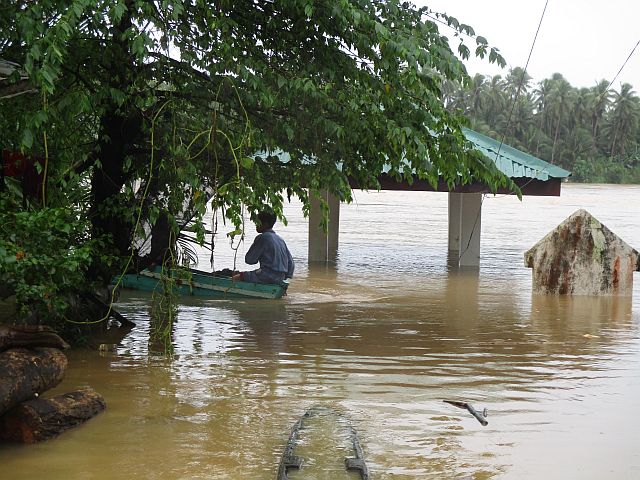 A man uses his a small boat to move around the flooded Taft in Eastern Samar. (INQUIRER PHOTO).

Taft, Eastern Samar — A farmer was killed while at least 1,600 families were affected on Saturday when floods hit 11 villages here following incessant rains.

Elpedio Zacate was found dead on Saturday after he drowned in floodwaters in Barangay Mantang, Taft.

He was last seen tending his carabao on Friday night out of fear that it might be swept away by floods.

Yuhan said the municipal officials were set to meet on Sunday afternoon to discuss passing a resolution placing the town under a state of calamity.

The declaration would allow the municipal officials to tap the calamity funds to help residents affected by the floods that destroyed agricultural crops and livestock.

He said water inundated rice lands and the national highway.

Yuhan said they planned to use 30 percent of the P4.4 million in calamity funds for relief operations for flood victims.

The weather bureau had reported that the downpour in the province dumped 300 mm of rain, which was equivalent to half a month of rain in December but was delivered in one day, resulting to heavy flooding.