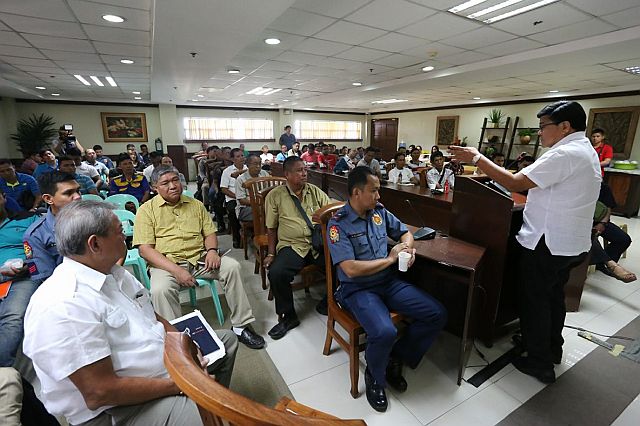 Acting Cebu City Mayor Edgardo Labella met with representatives from different security agencies and police officers at the city hall on Thursday morning on how we can ensure that the agencies are hiring physically and mentally fit security guards. (CDN PHOTO/JUNJIE MENDOZA)

Labella said this in a meeting with representatives of at least 50 security agencies and police officials at the city hall on Thursday morning.

He said the PNP, through the Supervisory Office for Security and Investigation Agencies Unit of the Police Regional Office in Central Visayas (PRO 7), should start implementing strict monitoring.

During the meeting it was found that while there are enough regulations under the law to ensure that security guards are physically and mentally fit for their jobs, it is not being completely followed by security agencies and that it is not strictly being monitored by the PNP.

“There are good requirements under the law. But as to how it is implemented, I think it’s not enough. I urge everyone to implement efficiently the law,” Labella said.

Under Republic Act No. 5487 or the Private Security Agency Law and its Implementing Rules and Regulations (IRR), security guards should undergo drug testing and neuro-psychiatric exams every six months.

But some representatives of the security agencies present during the meeting admitted that this is not religiously being followed.

Labella said these regulations should be strictly implemented to avoid more incidents that involve security guards, like the recent killing of Lawyers Goering and Gerik Paderanga, from happening.