Traffic and the countryside 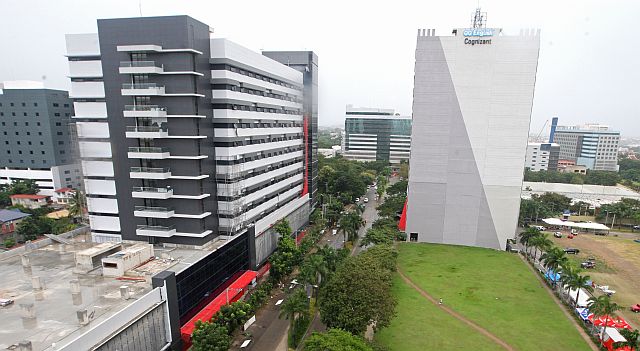 There should be property developments similar to the Cebu IT Park in other areas in Cebu to spread out the economic activities, which is one way of easing traffic in Metro Cebu. (CDN PHOTO/TONEE DESPOJO)

Spread development to the countryside.

Glenn Soco, Mandaue Chamber of Commerce and Industry (MCCI) president, gave this suggestion as one of the solutions to help ease traffic congestion in Metro Cebu.

Soco is one of Cebu’s business group leaders who is encouraging the government to address the growing traffic problem in Metro Cebu as this not only causes frustrations among commuters and motorists but has also caused losses and costs on businesses in Metro Cebu.

But aside from these, he also said that developments should also be spread across Cebu, including the countryside.

According to Soco, traffic congestion means more costs and losses to businesses in Cebu.

He said that based on a study from five years ago about Cebu’s traffic, P120 million worth of business opportunities are lost every day due to traffic.

“Aside from the economic loss, there are other losses we can’t even quantify like its effect in the social fiber. People become too irritable because of traffic, which means more road rage (incidents). Traffic also causes stress which reduces productivity. There must be something done to solve this problem,” he said.

Soco’s recommendations came after he learned of the increase in newly registered vehicles at the Land Transportation Office in Central Visayas (LTO-7), which can more likely add to the growing vehicle traffic in Metro Cebu.
Soco also suggested that cars or vehicles should be regulated to ply the roads especially those that are old and badly maintained because when they break down on the road, they would likely cause traffic.

Cebu Business Club (CBC) president Gordon Alan Joseph shares the same sentiment, saying government should establish standards of quality that will remove vehicles from the road that are dilapidated and are smoke belching.

However, unlike public utility vehicles (PUVs), private vehicles can run on the streets as long as it is roadworthy and has passed the emission test.

“We don’t have that law to phase out old private vehicles,” said Aleta Pulga, LTO-7 chief.

For public vehicles, bus and taxi units are only allowed to ply the roads in 15 years except for jeepneys since the government is still drafting specific guidelines for old passenger jeepneys.

Pulga also noted that phased-out units of 15-year-old buses and taxis can still be used as private vehicles.

“There is a moratorium of franchise for some denominations like buses, jeepneys, taxis, GT Express (units) and Filcab (multicab units),” Cuizon told Cebu Daily News.

As of December 15 this year, according to the LTFRB-7, there are 32,735 public utility vehicles (PUVs) in Central Visayas and most of these are from Cebu.

Pulga, however, said that traffic is not more on transportation but on the environment.

“Let us consider the infrastructure or the roads. As what we observed, we have narrow roads here in Metro Cebu,” she added.

She also considers obstructions on the road that cause traffic like barricades, illegal vendors and sometimes trees.

But for Engineer Joselito Sayson, officer in charge for construction of Department of Public Works and Highways (DPWH) 7, the volume of cars and roads should go together in terms of traffic.

Sayson said that the roads in Cebu could almost hardly accommodate vehicles.

“In my personal view, there is a need to have more widening and road projects to address traffic problems in Cebu,” Sayson told Cebu Daily News.

But road-right-of-way issues or obstructions have been considered problems that hamper road projects in Cebu.

In Metro Cebu, road-widening projects that have been hampered and suspended due to road-right-of-way issues include those in Barangay Canduman (Mandaue City), Gov. M. Cuenco Avenue in Barangay Talamban (Cebu City) and M.J. Cuenco (Barangay Carreta to Barangay Mabolo).

Soco, however, emphasized the importance and urgency of the building of more roads and the setting up of more mass transport systems in Metro Cebu.

He said there should be an efficient mass transport system that will discourage people from buying cars.

In a previous interview with Sherry Tuvilla, SM Supermalls regional operations manager for Visayas, a 2010 study indicated that 70 percent of Metro Cebu’s population drive their own car while the 30 percent take jeepneys.

Tuvilla, whose company SM Prime Holdings, Inc. has partnered with Manila-based Jam Liner, Inc. for MyBus, said that the study only indicates that private cars are contributing more to the traffic congestion, which is what they hope to address with My Bus, which can accommodate up to 90 passengers per trip.

Read Next
VOLLEYBALL YEARENDER: Of first timers and 4-peaters