A different kind of surrender 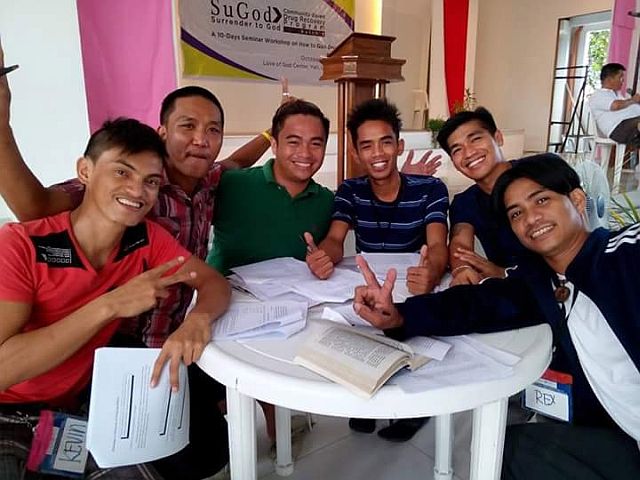 Noel Mantuhac (center, in green shirt), a former drug addict, is now living the life of a recovery coach. He said he is committed to bring out positive changes in the lives of the people he encounters. (PHOTO FROM NOEL’S FACEBOOK PAGE)

She was only 14 years old and wanted to get the attention of her parents who had parted ways.

A cousin, who sold illegal drugs, saw her crying and told her that he could make the problem go away.

“I joined him for a pot session. I observed how the others did it and I tried it. It was good. It gave me self-confidence, and I was not afraid to do anything,” said Katherine, who hails from Consolacion town, northern Cebu.

After two months, she wanted to quit, but in April 2016, her boyfriend died from a motorcycle accident.

Hurt and lost, she once again sought refuge in illegal drugs.

Katherine quit school, jumped from one boyfriend to another and now, at only 15, she is three months pregnant.

The father of the baby is also a drug user.

“I was touched by the talks on how as a person I am sick and need to be healed. But the struggle to stay sober is very tough. I still find myself using drugs from time to time especially when I am reminded of my dead boyfriend,” said Katherine.

It helps that she has a support system among her peers who meet every night at the Love of God Community Center to discuss their trials and triumphs.

Like Katherine, Keannu (not his real name), 37, started using drugs at a very young age.

He was 16 years old and studying in a university in Lapu-Lapu City when he was introduced to shabu.

Using the allowance sent by his parents from Cagayan de Oro City to sustain his vice, three years later, he suffered from catatonia, a condition of immobility usually resulting from a disturbed mental state.

He requested his parents to send him to a rehabilitation facility.

“But my drug addiction story did not end there. After I went out of that facility, I was using drugs again. I was a chronic substance abuser,” he admitted.

Keannu described his bout with illegal drugs as a vicious cycle of dependency.

He was married in 2002, but his drug addiction stopped him from developing a healthy relationship with his wife.

He worked as a medical representative, but his salary was only spent on drugs.

People around him did not trust him.

When President Rodrigo Duterte announced his war on illegal drugs, Keannu was certain that in a matter of time, he would be fetched by policemen because he was surely part of the master list of drug addicts in Cagayan de Oro.

His mother was the only person left who never gave up on him.

When he joined the second batch of the SuGod program, Keannu decided to live the life of a missionary to be part of a movement that aims to eradicate drug addiction in society.

His mother was the first person to strongly support his decision.

“My mother’s love for me is unconditional. She told me to just go and be a missionary and make positive changes in the lives of other people,” he said. 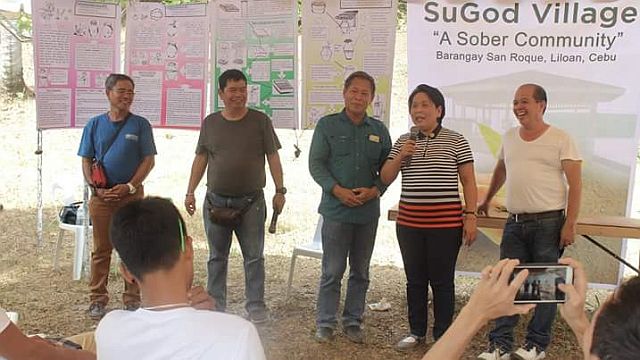 Rafaelito and Fe Barino (second and third from right), prime movers of the Duros Group of Companies, announce the site of the future development of Surrender to God (SuGod) Village, a health and wellness retreat farm that will employ happily recovered, drug-free individuals. (CONTRIBUTED PHOTO)

Before joining the program in September, Keannu was already sober, but he needed a community that will help him understand that he was a sick person who needed to be healed.

He is now one of SuGod program’s recovery coaches.

For Noel Mantuhac, 25, drug addiction led him to a path of failure.

A native of Toledo City, Mantuhac started using drugs in 2005.

After three years, he decided to quit and was sober for a year. But in 2009, he began to use drugs again and became part of a syndicate.

“I got my supply from a prisoner in a jail in Cebu. You won’t believe the amount of drugs cooked inside the prison cells. I sold drugs and I used drugs.

So I ended up using the drug supply that I was supposed to sell. I resorted to stealing from my parents,” Noel recounted.

At 19, he got married, believing that his parents would leave him alone to do whatever he wanted.

He only got worse, and the vicious cycle of illegal drugs and stealing from his loved ones became the norm.

Before long, cops picked him up and sent him to a rehabilitation facility.

“Rehab was a living hell. It was not what I expected it to be. People were mad all the time. They were shouting. It was very disturbing. It made me hold grudges towards people who put me in lock up,” he said.

He stayed there for a year, but barely a month after getting out of rehab, Noel used drugs again with his younger brother.

He shifted to marijuana, believing that marijuana was a better alternative to shabu.

It was cross addiction and still, did not make him any better.

At that time, he just started a call center business in Balamban town, western Cebu. The business was a success, but he became dependent on marijuana and that led to his downfall.

“I couldn’t work properly when I couldn’t smoke weed. I would get pissed when I ran out of stocks. I often shouted at my employees,” he recalled.

His wife left him because he had a relationship with another woman.
Noel felt hopeless.

“I went home crying because everything was falling apart. I talked to my sister, and she told me to join the third batch of the SuGod program,” he said.

After attending the 10-day program, Noel was inspired and committed to take his healing a level further.

He went on to enroll himself in another rehabilitation facility, this time inside It Works Chemical Dependency Treatment Center in Ozamiz City, which is run by Rene Francisco, co-developer of the SuGod program.

In It Works, Noel learned the difference between the 12 Steps of Recovery from Drug Addiction and the Therapeutic Community approach.

“I learned to accept the fact that I am an addict. I should not deny that. I learned that 12 steps is for addicts and therapeutic community kind of rehabilitation is for those with behavioral problems,” he said.

Noel found his calling in being a recovery coach.

Like Keannu, he is committed to live a life of service to drug dependents and former addicts who want to change their lives for the better.

“The program works because everyone listens to your story. There is no judgment. They understand the addict’s story because most of them experienced or encountered these problems. It is a fellowship of people with similar experiences,” said Noel.

Noel said he discovered God in the SuGod program.

“I was an atheist. But now I feel like a Higher Power placed me in this situation. I see God driving my life now and I’ve never felt so satisfied in my entire life. Never in my wildest imagination has it occurred that I will believe in God,” shared Noel.

“I refuse to believe that there is no hope. I don’t think that the only destination for drug addicts is the grave. What we are doing is to really restore their dignity as a human being because that way, we give them the opportunity to live again in a community that does not condone random killings but a community that gives people chances to change and be better,” said Barino.

Read Next
Taxi driver in trouble